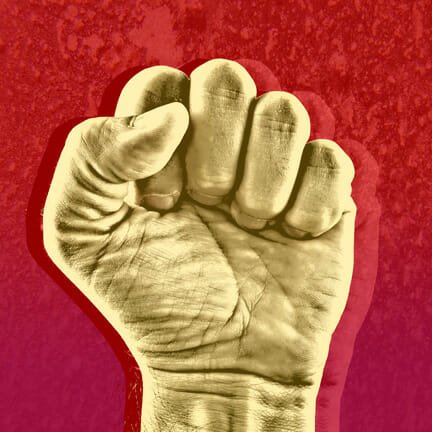 Do your employees passionately care about a currently trending topic?

You know, what the talking heads are blathering about on television, writing about in the newspaper, or most currently, what’s filling up your social media feed with stances one way or another?  This could be a local issue or something that’s being debated on a national level.  And it’s getting ugly.

Here’s a question one of my consulting clients asked me recently, and I’m paraphrasing a bit to make the issue neutral, but it went like this:

“What do you do when an employee refuses to perform their job because they disagree with the social statement of the sales order?”

Simply put, the printer refused to work on the order because they disagreed with the political statement that was to be printed on the t-shirt.  “I’m not printing that!  No way!”

Has this happened in your shop?

I’ve also had experiences where people from one particular demographic group that works in the company participates in a staged mass-planned “sick out”.   This is where members of an affected group organize on a state level in all industries to just not show up for work one day.  Instead, thousands of workers descend on the government capitol and demonstrate publicly their concerns with a march.

The idea behind both refusals to work is to disrupt the business process to illustrate that this particular topic matters enough to them personally and that you need to pay attention.

People come preloaded with a kaleidoscope of backgrounds, skill sets, education levels, and socio-economic or cultural differences.  In your shop, you may have two, three or more languages being spoken.  Everyone is different.  They see things uniquely, but importantly, some ideas or topics matter to them more than others.

Sometimes on a gut-wrenching, molecular level.

If you are an owner or manager when faced with these issues, what should you do?  Who has a game plan for social activism or unrest?

Probably the first thing to happen is to get outraged in how disloyal your employee or employees are behaving.  After all, you treat them well, provide industry skills training, give them a safe and comfortable place to make a living and pay them fairly.  (At least, I hope you do…and they are not protesting you)

If things are really sticky, it’s a good idea to consult your human resources or legal team for advice.  Don’t expose yourself to a bigger problem.

One thing is for sure, and that is that you have to deal with the situation.  You need to protect your customers, your business, your reputation, and even the employees that are making the fuss.

Here are some thoughts:

First, recognize that this is an opportunity to construct a dialog with your staff regarding the issue.  It is important to listen.  Be calm.

Well for one, authentic communication builds trust.  Nobody is saying you have to agree with the stance your employee or employees are taking…but if you come to the table and try to comprehend what’s going on in their lives and why they are taking the position they may see you in a different light.

That’s the purpose of demonstrating; giving their side of the story some leverage.  The “stick it to the man” mentality is an extremely one sided conversation.  As soon as you start listening and comprehending their story, a lot of the closed-fist venom becomes less potent.

In today’s social media and extremely public online world, every company is exposed along with their values, mores, culture, pay, workplace rules, leadership habits and decisions that are being made.

You might like to think that what goes on in your shop stays there when the lights are switched off, but in fact everything that happens is being analyzed, dissected, compared and discussed in the break room at lunch, over the dinner table with their families, at the bar after work with their friends, on social media, or at any other setting where people talk.

It wasn’t too long ago when any company’s leadership could dictate policy without consequences.  These days, whatever is said can be public knowledge in a matter of seconds. Just a few quick keystrokes on a phone. Send.  Boop.  What you just said is out there floating around.  With pictures.  Maybe a video.  Loaded with a hashtag to make it easier to find.

Talking about important, over-arching cultural or society based concepts can be hard.  Nobody wants to bring up controversial subjects.  However, if you have part of your workforce refusing to do the work because they have a problem with the subject matter of an order, or a hard-line approach to a governmental public policy and they want to make a group statement; then you owe it to your relationship with your workers to have the conversation so their won’t be any misunderstanding on the subject.

Here are some thoughts you can use:

Try to keep the location neutral.  A meeting held in your office says something different than on the work floor.  Maybe a break room or other meeting space would be better.

Start off by asking them to tell you what is going on and why they feel the way they do about the topic.  It’s their viewpoint, so don’t disagree with them, even if you have a different opinion.  Remember, this is a conversation, not an argument.  Let them speak.

The goal here is to understand why your employees are so wrapped up in the topic that they are willing to protest.  This means you need to be actively listening.  Watch your body language.  At the end of the conversation you need to understand the emotions of the day.  If you are asking good questions and getting them to divulge their personal experiences and stories, you can get a better sense of what’s driving the challenge for them.

People may not remember what you said, but they will always remember how you made them feel.  Will it be respectful?  Full of mistrust?  Supportive?  Angry?

At one point it is going to be your turn.  Having a worker refuse to participate in the production of a work order, or an entire demographic of a shop walk out for a day, both can cause tremendous strain on your scheduled workflow and maybe even some harsh financial consequences.

After all, that’s their intent as they want to get your attention.

You need to discuss with them though, the impact of this decision.  Are there alternatives that would be acceptable to them rather than not working?  Is there anything you can do to support them, but keep things on an even keel for your customers?

Also, what happens if that order is late or you lose that client because of their action?  Maybe your staff hasn’t thought their idea entirely through and didn’t want to cause irreparable harm?  They just wanted to bring their viewpoint up and out into the open.

Don’t draw a line in the sand, but be clear what their actions could mean to the company.

At the end of the day, you might want to construct a policy regarding circumstances like these after the conversations and emotions have died down.  All parties might need time to think, so before you start amending your employee handbook, give it some time.

This also could be a good opportunity for your staff to help write the policy with your HR team.  Get a few of your staff members to brainstorm on how you should handle a similar challenge.  How would they react if another worker protested their personal viewpoint or another topic?  What’s fair?  What’s legal?  What makes the most sense?

Often, to gain trust you have to give trust.  Nothing says you are important more than elevating someone to help resolve a challenge.

You could use their recommendations to help write how to deal with a challenge next time.

Newton’s third law of physics states that for every action, there is an equal and opposite reaction.

I wish it was that simple for human beings with an emotional cause.  Usually though with passionate causes, for every action there is a reaction that can get overblown and out of proportion quickly.  Sometimes it’s justified.  More often than not though, it spirals out of control and takes on a new life of it’s own.  Like adding a 55 gallon drum of gasoline to a bonfire.  You’ve seen it happen.  Probably in your neighborhood.

In your shop, the long term thinking has to be about your customers.  They are the lifeblood of your company.  However, your employees matter probably just as much.

When dealing with a societal challenge you have to have an empathetic ear.  Listen to what’s going on and navigate your way through the problem as best you can.

So your printer doesn’t want to print that order, or half of your employees want to go march at the demonstration one day?

Should you come down on them like a ton of bricks?  What happens a week or a month from now if you do?  Would the hurt feelings and resentment be worth it?  What if your reaction is the tipping point to a bigger problem?

Don’t cut your nose off to spite your face.

One thing is for sure, and that as human beings we will not agree on controversial topics all the time.  Our lives are made up of too many experiences, cultural backgrounds, and inherent mistrust for that to happen.

If we take a few minutes though and try to relate to each other, share our stories, and actively listen…we might just bridge that divide that separates our positions on these topics.

Can’t we all just get along?

“A riot is the language of the unheard.” – Martin Luther King Jr.

“We cannot solve our problems with the same thinking we used when we created them.” – Albert Einstein

“We have two ears and one mouth so that we can listen twice as much as we speak.” – Epictetus

Sell the Sizzle
Scroll to top