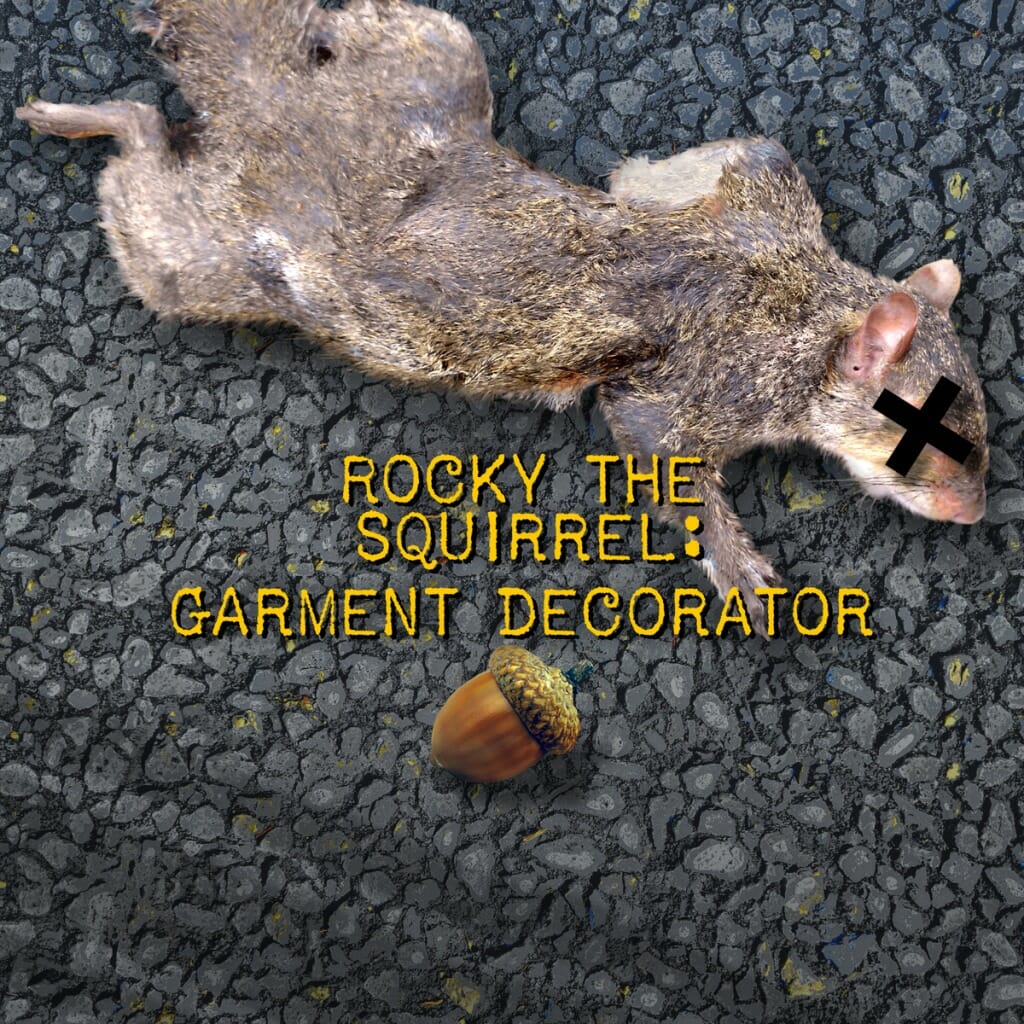 Once upon a time he ran a Garment (Fur) Decoration Shop (Tree) for all the other animals in his area.

He used to have a good business and made a lot of acorns over the years.  Rocky wasn’t comfortable with change, as he always liked to do things “his way”.

Recently there has been a good bit of financial pressure in his Tree.  Rocky has been losing acorns steadily over the last year or so.  His wife Matilda has been in his ear about trying something new to grow the business.

She fancied a bigger nest in that Oak Tree across the pond.  The one with golden leaves in the fall.  You know the one.

Rocky’s biggest challenge is that gaze of Raccoons that work in the forest across from the farmer’s field.  They built up a huge fur decorating enterprise seemingly overnight and have been steadily eating into Rocky’s territory.  One client after another, they all seem to be heading away from Rocky.

“They don’t even do a good job!”, Rocky used to say jealously.  “I’ve seen their work.  Sloppy.  In fact, I heard the Raccoons aren’t even doing the printing!  They are contracting the orders out to those Badgers by the river.  They run everything out of their basement Log.  They just ship the goods in Raccoon branded  boxes!”

But look at poor Rocky now.  He’s a mess.  Business indecision led to his heartbreaking demise.

The other side of the asphalt was calling.

For years he had heard tales of the siren song of what was over there.  New ideas.  New ways of doing things.  New equipment.  New everything.

When he finally had enough of Matilda’s nagging he left to venture over to the promised land.  He was reluctant to go, as he’s always been more comfortable in his own Tree.

He never completed the trek.  The crime-scene photo above captured his result.

Alert and eyes wide, he thought he was making a safe bet by darting over the pavement.  It looked clear.  Quick, zig-zaggy steps.  Just like usual.  Despite being an older squirrel, Rocky hadn’t lost much in his speed.  Yet, he made a dangerous decision.

He stopped mid-step and questioned his direction.

“What exactly is on the other side anyway?”  Mumbling, he pivoted to his left, “Maybe I’m better off on familiar ground!  I’d better go backkkkkk.”

That’s when it hit him.

The truck bumper of change.  Driven by one of those scrawny, devious Raccoons.

Rocky didn’t stand much of a chance.  He was too slow to try something new and got a face full of chrome instead.  Jelly-legged in fear, he was flattened by his biggest rival.

If only he had stayed the course and just embraced the thought of learning something different.  Even at this late stage in the game, he still could come out ok.

He’d be eating a big slice of fresh homemade pecan pie that Matilda baked earlier that day.  Coffee cup in one hand, tiny fork in another.  He’d be squeakily describing the enthusiastic magic and epiphany of the “new”.

So if Rocky had made it across, what would he have discovered?

Rocky wasn’t one to socialize or ever, ever admit that he didn’t know something.  Squirrels get more prideful the longer they do something the same way.

Experienced in traditional fur decoration methods, he always struggled with learning anything different.  He just didn’t see the value.

New inks or threads, techniques, and even suppliers didn’t matter to him.  “Go with what you know” was always safe.

Across the road was a land full of fresh ideas.  All the other fur decorator animals were constantly inventing better ways to do the same old thing.  A lot of them were tremendously successful.

Sure, the old ways still worked.  That’s what made Rocky always so secure in that “his way” was the right way.

But on the other side of the road the new approaches made the other Trees more competitive and relevant.  This drove the growth that Rocky was missing.  And more acorns.

Heck, some of these animals even benefited from new Eagle programs.   By adopting new sustainability strategies or worker-animal training initiatives, your Tree could get free acorns.  Just for adopting a different way of working.

You just needed to know how fill out that paperwork.  Even in the animal kingdom there was bureaucracy.

Every animal was fighting the same fight against those damn Raccoons.  Because these smarter squirrels banded together, they learned how to operate their businesses better.

What equipment made production faster or easier. How to decorate new types of fur.  Even different pricing strategies.

Soon, their acorn piles were the highest they’ve ever been!  As a result, they all had the best trees in the woods.  All sturdy oaks.  You should see their nests.  Some were on multiple branches.

Their trick to fuel the growth was simple.  Inject fresh thinking into their tired old game.

They gathered at different watering holes sporadically during the year.  These were nicknamed “Trade Shows”.  There they could visit with each other.  Compare notes. Even test out and view new products for decorating fur.

There were even classes dedicated to teaching the deepest held secrets!  (All taught by the best Owls)

All you had to do is show up.  Amble around.  Touch stuff.  Listen.

It was the listening part that Rocky found troubling.  Even away from a trade show floor.

Rocky always hated talking to salesanimals.  “What a waste of time”, he would always say.  “They just want to sell me something.”

The Scurry knew better though.

They always actively listened to the salesanimals when they trotted over to their Tree. Spending time with them allowed them to learn new tricks.  Plus they always had great samples.

Who doesn’t love that?

The “Vine of Continuous Improvement” never grew around Rocky’s tree, because he never knew to plant the seed.  The best seeds, and the easiest to grow, all came from these salesanimals.

“I’ve been decorating fur for years!”, he would squeak when anyone mentioned talking to a salesanimal.  “Geez, what do they know?  If they knew what they were doing, they would still be in the fur game themselves!”

Prideful, Rocky never noticed the other squirrels in his own Tree.  They just shook their heads and scrambled away.

Rocky never could quite hear what they were chattering about.

Time to Improve the Tree

One of Rocky’s largest challenges was time.  He never had any.  “I’ll get around to that later.”, was a phrase Rocky said at least once a day.

In his Tree, Rocky was famous for starting a project and then bounding off to do something else.  Leaving the first idea half completed and the area a mess.  Scattered around his tree there were at least six improvement attempts.  Zero finished.

The irony of course is that Rocky employed many Squirrels and at least nine temporary Chipmunks.  He never let any of his subordinate staff handle anything though.

Charles the Marmot even had a degree in Branch Management from Acorn State University.  But Rocky couldn’t see past his whiskers to put that to good use.  Charles had studied across the road.   He had even been to a few gatherings at the “Trade Show” watering hole when he worked for a Tree in the next valley over.

Charles had suggested upgrading their fur decorator to a newer model.  There had been some mechanical and technology advances in the last few seasons.  The newer models outperformed the older ones.  This potentially would make a tremendous impact on the Tree’s production schedule.   Less downtime meant more production completed per day.

Rocky wouldn’t hear of it.  “Our Tree paid this equipment off years ago!”, he stammered red-faced.

Charles even showed him a comparison spreadsheet. New equipment versus the older version.  It graphed what it cost them in acorns in overtime to keep up the same pace if they kept using the older equipment.  The new equipment would be paid off in almost a year and half at the same rate.

It was easy math, even for a Rodent.

That’s how Charles the Chipmunk wound up working for the Raccoons.  Rocky fired him for bringing in new ideas.  And for not agreeing with him, of course.

Charles brought all the new ideas to the Raccoons, which they hungrily ate up with scavenger-like relish.

The truck that killed Rocky was packed solid with orders going to Rocky’s old customers.  It even held six boxes of goods for the fat old Beaver for their annual dam building event.  Rocky had been printing that job for a decade at least.  Not anymore.

The one thing that always terrified Rocky was that across the road lived all the Owls.  Owls are scary.

Because to Rocky, they were always asking questions.  Rocky hated questions.

“Who”, said the owl, “are your customers and where do they live?”  Rocky hated that one.  Of course his customers live in his woods!  They are his friends and neighbors!

“Then why are the Raccoons stealing your business?”

All Rocky could think about was that they were just sneaky.  “C’mon, they wear bandit masks everyday!”

But what Rocky couldn’t face was that the Owl always had good answers to go with the questions they proposed.  The Owl knew that Rocky’s biggest problems could be broken down into a few different buckets.

What the Owl wanted to suggest to Rocky more than anything was to write a business plan and focus on resolving his future-oriented challenges.

“Failing to plan is planning to fail.” was the old Owl saying.

But Rocky never did talk to any Owl with real fervor.  Lip service at best.

He just couldn’t admit that he needed help or even that there might be a better way to run his Tree.  What was even more ironic is that the Owl would have come to Rocky.  He didn’t even need to cross the road.  Owls know how to fly.

Sure, you know what you are doing.  Without your skill, hard work and determination your Tree wouldn’t be successful.

Despite all that, there are plenty of reasons to cross the road and search out better answers.  Plant the seed for the Vine of Continuous Improvement today!  Get the help you need:

Click Here to find out how to let me help your Tree.

“You don’t learn to walk by following rules.  You learn by doing, and by falling over.” – Richard Branson

Tags:
Talk to Marshall and get his help.
Learn More
Ebook