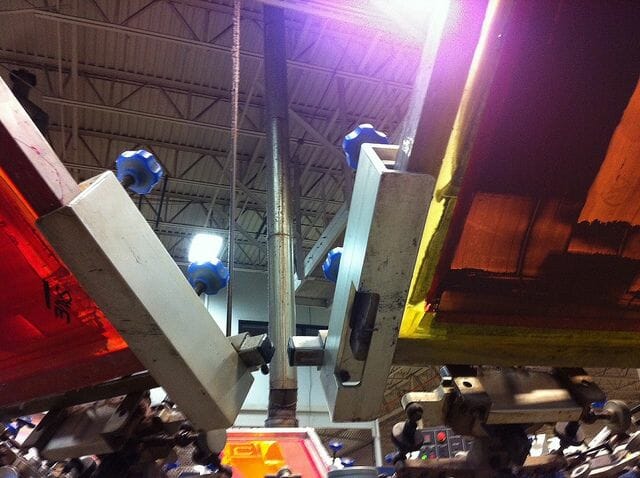 One mantra that I have chanted seemingly throughout my career in the decorated apparel industry is the phrase “We don’t have to wear it”.  Meaning, we’re happy to be printing that…but it sure is ugly.  Over the years I’ve seen some really poorly designed art that someone wanted to put on a shirt for some reason.  The sad part is that some of these were “professionally” designed.  Now, I fully realize that taste is subjective, and maybe I don’t have to like everything…but honestly you know what I’m talking about right?

In that spirit, I thought it might be interesting to cobble together a few commonly handed off problems that most shop art departments face sooner or later.  If you are new(er) to this business be prepared to tackle these challenges sooner or later because they are headed your way.

Sticky Fingers.  Yep.  Your customer flat out stole this art from some website out there and has asked you to “recreate” it, because they can’t get a better file.  The reason they can’t get a better file is that they don’t own the artwork.  There’s a big difference between art that was inspired by another creation, and printing an identical twin.  Most shops are ethical enough to say no.  Most.

Word to your Mother.  Microsoft Word and PowerPoint are great for office applications.  This blog is written in Word actually.  I have created some informative presentations with PowerPoint.  However, they aren’t much use for t-shirt art.  Some people think that this is acceptable to use; I guess mainly because they did it on a computer.  Just say no and hire a professional.

What’s the Vector, Victor?  As you know, vector art is the de facto standard for most jobs we’ll print.  That’s why art departments everywhere ask for it.  Placing that 72 dpi logo you downloaded off the internet into Illustrator does not make it a vector file.  That’s the same thing as taking an egg and placing it into an unheated oven and calling it a cake.  It just doesn’t work.

Napkin.  That’s right.  You are going to get a napkin for artwork one day.  I’ve seen this happen twice, and both times it was the only logo that the “restaurant” could provide for the sponsor back for a charity event.  You often wonder how these knuckleheads stay in business.

Camera Ready Art.  Speaking of bad art, I once had someone send me a photograph of a bartender wearing a t-shirt with their bar logo on it, as the “camera ready art” for their order.  In case you ever wondered where that term came from, it doesn’t imply taking a photograph of a logo.  Long before computers, graphic artists used devices called stat cameras.  These were very large (think refrigerator size) cameras that shops used to make their films.  Each plate was shot individually, and it was tremendously slow compared to using computer graphic programs now.  Yes, I’m that old.

Too Many Crayons.  Just because you can print ten or twelve colors, doesn’t necessarily mean you have to.  Some of the best t-shirt designs I’ve seen were only a few colors.  Quite often top selling designs use only one.  Limiting your palette sometimes is a good thing.

Getting Too Cute.  Sometimes designers get too excited with all the techniques and offerings that a shop can print.  Knowledge can be wonderful, and this is an industry with lots of terminology, cool effects and the ability to pull off some amazing creative work.  That all goes out the window when the artist can’t translate what’s in their mind onto the shirt without constant changes, new screens, and different inks on press.  Learning something is one thing.  Repeated problems or challenges that cause production problems are another.

Kitten Skulls.  The most dreaded phrase heard in the art department from your customers or sales staff has to be “Do Something Cool”.  These aren’t art instructions.  Instead, it’s license to waste your art department’s time.  Coolness is subjective after all.  One person might like skulls; another may think kittens are cool.  A third might like kitten skulls.  Unless you really want something unexpected, spend some time and write a good creative brief on what you want designed.  Include colors, fonts, size, logos to be used, all verbiage (spelled correctly) and explicit instructions on what’s needed.  It’s basically a recipe that you want your art staff to follow.  Otherwise…

Clip Art King.  I guess there’s nothing really wrong with clip art.  It serves its purpose.  The designer in me though can’t stand using off the shelf, pre-designed anything.  I prefer to start from scratch and have my creative ability build the file so I’m working in my style and voice.  Clip art to me always looks hacked together.  Professional chefs probably don’t bake their cupcakes from a box either.

It’s Just Ugly.  Poor design.  Not put together well.  Five different fonts.  Whatever…it’s just horrible to look at. Have I mentioned to you how creative our art staff can be?  We’ll still print it though.  Good thing we don’t have to wear it.

Self-Destructive Behavior – When Your Employees Shoot Themselves in the...
Scroll to top