The Road to Hell is Paved With Good Intentions 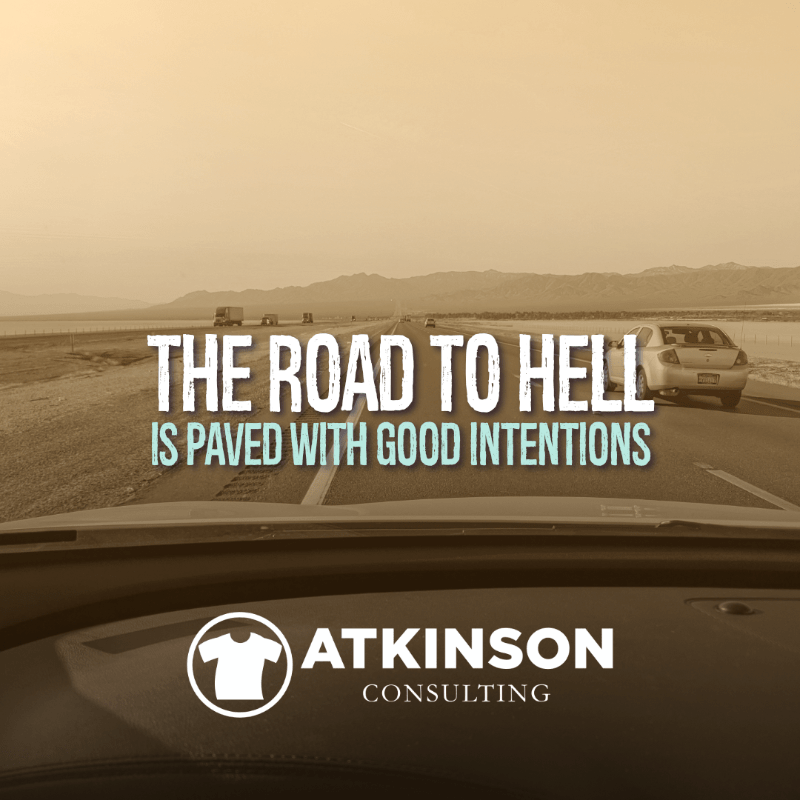 Let’s pretend I’m sitting next to you at a bar or a restaurant. That’s how I would normally tell you this one.

After finishing up a week’s worth of trade show business in two cities, I loaded up my bags in my rental car and got ready for the drive home. I was leaving Long Beach California for Mesa Arizona, where I live. It is about a five and half hour drive.

Settled in the car, I text my wife that I’m on my way. I pull out of the hotel driveway and listen for the GPS navigation for the turns to get me on the highway back home. It is the usual Southern California traffic with congested lanes packed full of erratic drivers. I have a little less than half of a tank of gas. I think to myself that I should fill up before getting too far down the road, but traffic is moving great.

So I just keep going.

In my head, I’m thinking about how well the week went. Good meetings and events. I taught four classes to 218 people in businesses all across the country and even the world, as there was one nice woman from Australia in one of the sessions. There was plenty of fun too with breakfast, lunch, and dinners with industry and even personal friends.

As I wind through the hills and low mountainous terrain, I keep thinking about how the traffic is great. It’s like a river of cars flowing. I’m in a pack of about eight or so in the far left-hand lane, going about eighty-five. Most everyone is simply getting out of our way. I glance at my gas gauge and it’s a little less than an eighth of a tank now.

I should stop, but I don’t. Instead, I try to find the score of the Kansas City Chiefs versus Green Bay Packers game on the radio. The best I can find is a sports-talk channel and they are commenting that Packers are certainly disappointing. I don’t care because I’m a Dallas Cowboy fan, and we’re already used to that. It’s a perpetual “Wait until next year” mantra.

Our convoy keeps motoring through the beginnings of the Mojave Desert. On the right-hand side of the road is a sign that reads, “Next Exit for Service. Next Service 48 Miles.”

I finally decide that now is the time to get gas. This next exit will do, and I probably have cut it too close. I pull off and just past the overpass that I cross are the remnants of a commercial district. It looks like a gas station and some warehouses. But they have been long closed. It’s a ghost town.

Through my windshield, I can see the white peaks of buildings several miles away down the road. Maybe there is a gas station down there somewhere.

I drive for a little bit and the scenery along the road is getting junkier. Old mobile homes, abandoned cars, big piles of scrap. This is where rust goes to die.

Nobody lives here. Why would anyone put a gas station down this road? About a mile, I make a U-Turn away from the location for the next Mad Max movie and head back towards I-10. I cross over the overpass again, and right as I’m turning left to get on the on-ramp the idiot-light for low fuel pops up on the dashboard.

I’ve got 20 miles worth of gas in the tank, and the next opportunity for it was in 48 miles. That math sucks.

So, do I turn around and head west? How far was an exit with a gas station? I pull over and ask Google on my phone, “Nearest gas station to me?” Up comes a very sparse and incomplete list. At the top is the suggestion 48 miles away.

Better the devil that you know I guess. I head east.

As I creep left onto I-10 I pull behind a semi-truck. Painted in large letters on the back doors of the cargo trailer reads, “Werner – We Keep America Moving”. That’s exactly what I need.

Instead of 85 miles per hour, it’s ok to do 62 behind big blue. I remember seeing the Tom Cruise movie, “Days of Thunder” and they talk about drafting behind another car to conserve fuel for the race. I base my survival strategy on that dumb movie. Between Werner and Tom Cruise, maybe I have a chance.

My wife calls to check on me. I inform her about the good news.

I’m going to run out of gas in the Mojave Desert.

This is the road to hell because I should have pulled off thirty or forty exits ago. There is absolutely zero she can do, so we agree that I’ll call with either victory or defeat based news.

She agrees with the dashboard light.

Then, like the slowest NASA countdown in the history of numbers.

Zero. Out of gas.

But I wasn’t. The motor was still running behind my buddy Werner. He was indeed keeping me moving.

That was twenty miles. Out of forty-eight. That leaves twenty-eight miles to go on a rented Kia Sorento. How many miles below the “E” would the nice folks at Kia in South Korea give me?

During that time I began to wonder what might happen if the car did run out of gas. Would it spurt and rattle and die to a stop? Maybe the steering wouldn’t work? Could I make it to the side of the road?

It was almost dark and I certainly didn’t want to be pushing a car with traffic whizzing by at my former speed.

Up ahead though, I could see a dot. Kind of green on a white square. It was miles away. Miles.

How much magic did Werner have?

Evidently quite a bit. A few excruciating minutes later, there was an exit with not one, but two gas stations. Two!

Valero was the one I chose. It had a big green V with a gold squiggle for a logo. That’s what I saw on the sign from across the desert with night descending.

I think filling that tank up with gas was some of the best money I’ve ever spent.

Why Is This Important?

These are the decisions that we don’t make. Every day it happens to you too.

That client that needed the information. “Oh, I’ll do that tomorrow.”

The marketing program that never makes it off of the seminar note page.

Just like me not pulling over and getting gas. The entire time I was thinking, “Hey, I’m smarter than this. How did this happen?”

As it turns out, the best time to do anything is now.

“When you are courting a nice girl an hour seems like a second. When you sit on a red-hot cinder a second seems like an hour. That’s relativity.” – Albert Einstein

“The chief function of the body is to carry the brain around.” – Thomas Edison

“Behind every great man is a woman rolling her eyes.” – Jim Carrey