The Wrong Type of Mistakes 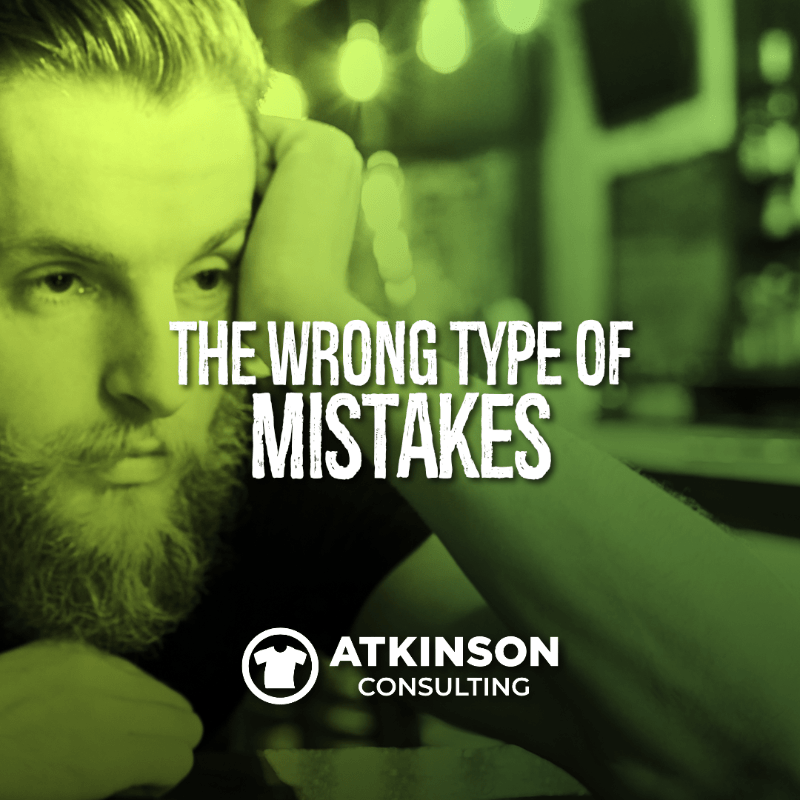 Did you know there are two types of mistakes? The right mistake, and the wrong mistake.

What’s the difference? How do you know?

Well, this article is about shedding some light on the differences, so let’s get to it.

First, let’s discuss the right type of mistake. We’ll label this as the “Honest Mistake.”

And that is great. Good job!

This is the best kind of mistake as this means you are learning. Something you tried didn’t work. My friend Richard Greaves says, “Experience is what you get when you don’t get what you want.”

When learning to do something new, these are the mistakes that you want. It is data.

“I tried this and it didn’t work. So now, I’m trying something slightly different.”

The right kind of mistake is how you grow. You keep after it. It is how you learned to ride a bicycle, kiss another person, write a poem, paint a picture, cook, or learn to close a deal. Not to mention, every facet of the decorated apparel industry.

Often, if you aren’t failing at something you aren’t growing. This is a responsible failure and is usually chocked full of humility.

“I’ll never do that again!”

The Wrong Type of Mistakes

On the other hand, the wrong type of mistake is rooted in something more sinister that needs to be culled out of your organization or business.

This is a direct leadership challenge for your management team.

The first wrong type of mistake is built on a foundation of ego. Often the person making the mistake will reject the idea of it even being a mistake and instead blame something or others.

Instead of adopting a posture of learning, they make excuse after excuse as to why it is not their fault. Despite the fact that nobody is blaming them, they constantly shift attention away.

Forget about them owning the solution, as they usually can’t even acknowledge there was a problem.

Have you ever asked someone about a mistake and they pressed the nuclear button on the situation and over-reacted? That’s their ego talking.

When the volume goes up and their tone becomes more aggressive it only serves to cover up the fact that they may not understand or know the right way to do something. It is a magic trick designed to get you to leave them alone.

Don’t fall for it.

Another type of mistake is the repeat offender. Do you have these folks working for you?

This is the person that makes a mistake, and when it is brought to light they swear up and down that they won’t do it again. And then they turn around and repeat the same problem.

It has to be the most frustrating part of managing a team. Are they pretending to reform here?

The problem with this type of Pretender Mistake is that somehow they make you feel like it is your fault that they keep making the mistakes. You should give them more time, or training, or chances.

It’s all your fault! In the meantime, they are going to pretend that they will do it differently the next time. Only to keep repeating the mistake.

Worse, is when you let them. You don’t have time to correct them AGAIN, so you just allow the mistakes to continue.

Which brings us to:

This is probably the worst kind in my book. Someone is making a mistake, and other team members or even their supervisors ignore the problem.

This could be about anything. Large or small. How to clock in. The proper way to do something. Completing a form or sending information. Not following the directions or standards on a task.

The major challenge with the Ignored Mistake is that when it is repeated often enough it becomes ingrained into the culture. Avoiding the confrontation equals implied permission.

This is why employees might feel that it is acceptable to clock in twenty minutes before their shift starts and eat breakfast in the break room. Or not fill out the order information completely when starting a new production order. Even not cleaning up after themselves when they make a mess or they decide to reheat their shrimp dinner in the microwave. (please just say no)

When they are eventually confronted about it, they shrug it off with the attitude, “Hey, nobody said anything…!”

Correcting the Wrong Type of Mistakes

The good news is that it is not too late. Even if you have a team of the worst offenders in the universe working for you, you can steer the ship back in the proper direction.

First, Be Vocal With Questions

The first thing that is needed is to be vocal about the problem. Your leadership team has to acknowledge that there are issues and mistakes being made. That doesn’t mean they need to be harsh about it, it simply means that they have to speak up.

The goal is not to embarrass anyone, but to get to the root cause of the issue. They need to discover more about the situation by asking questions.

“How did this happen?”

“What is the correct way?”

“Where should you go to find the answer?”

You want to acknowledge that there was a mistake, but find out more about what’s going on. The goal is to discover the source of the issue, not get the other employee’s defensive shields to go up.

Change is what you are after, not an argument.

What To Do: Egotistical Mistakes

As a leader, you absolutely have to correct this behavior so it doesn’t grow and get worse. Trust me, your team is watching how you handle this person.

Employees that make Egotistical Mistakes are often are loud and vocal about labeling their excuses. Deflection is their game, and they are counting on your management team to not want to publicly confront or challenge them.

If your supervisor or managers are weak-willed they will fall victim to this type of employee’s gambit. The employee will blame anything and everything rather than admit that they made a mistake.

Stronger leaders will see through this and apply more discipline and consequences to these employees for making the mistake. This may or may not have an effect on the employee in question, but it will serve to teach other employees regarding the correct way to do something.

What To Do: Pretender Mistakes

First, you have to separate the Honest Mistake from the Pretender Mistake. This sometimes is tough.

For this type of situation, I am recommending more patience and questions initially. You have to determine the real situation. If they can’t comprehend how to do something correctly, it is up to you to work with them until they do.

However, at a certain point, you have to label the situation correctly and be smart about how you are handling the employee in question. One way that has worked for me in the past is called “The Four Pieces of Paper.” At a meeting, you will review each page with the employee in question, and both sign and agree to what is written.

What To Do: Ignored Mistakes

This type of mistake is about teamwork and your company culture. Correcting an Ignored Mistake entails getting everyone to buy into the fact that the work that you do is a product of everyone’s involvement.

When someone is making a mistake, others can’t ignore that fact. They should share with them the standardized, correct way of doing something.

This can kick in when you have built a solid foundation of teamwork in your company. People want competency and feel empowered to speak up when they see something that isn’t quite right.

A-team players want to work with other A-team players. But, they know that not everyone is at their same level and will gladly lend a hand to show others the way.

The solution to the Ignored Mistake scenario is more about who are you letting on your team, than forcing corrections.

Correcting Mistakes Is About Building Positivity

For something to be wrong, that means also that something must be right. I’ll bet you do more right than wrong every day.

What you want to celebrate constantly is that positive nature for your shop. What are you consistently doing right? Are you talking about that and holding that up as an example?

Are you clear about what success looks like in all facets of your business?

When your management or leadership team seeks to correct mistakes, they are working on building a culture that defines what is the correct way.

If we only paddle on one side of the canoe, we’ll only travel in circles.

Making a course correction, even if this means extreme employee discipline such as termination, helps to move things in a positive direction.

“It’s not what you preach, it’s what you tolerate.” – Jocko Willink

“If you are not making mistakes, then you are not doing anything. I’m positive that a doer makes mistakes.” – John Wooden

“Mistakes are the portals of discovery.” – James Joyce