T-shirts Don’t Care Who Prints Them 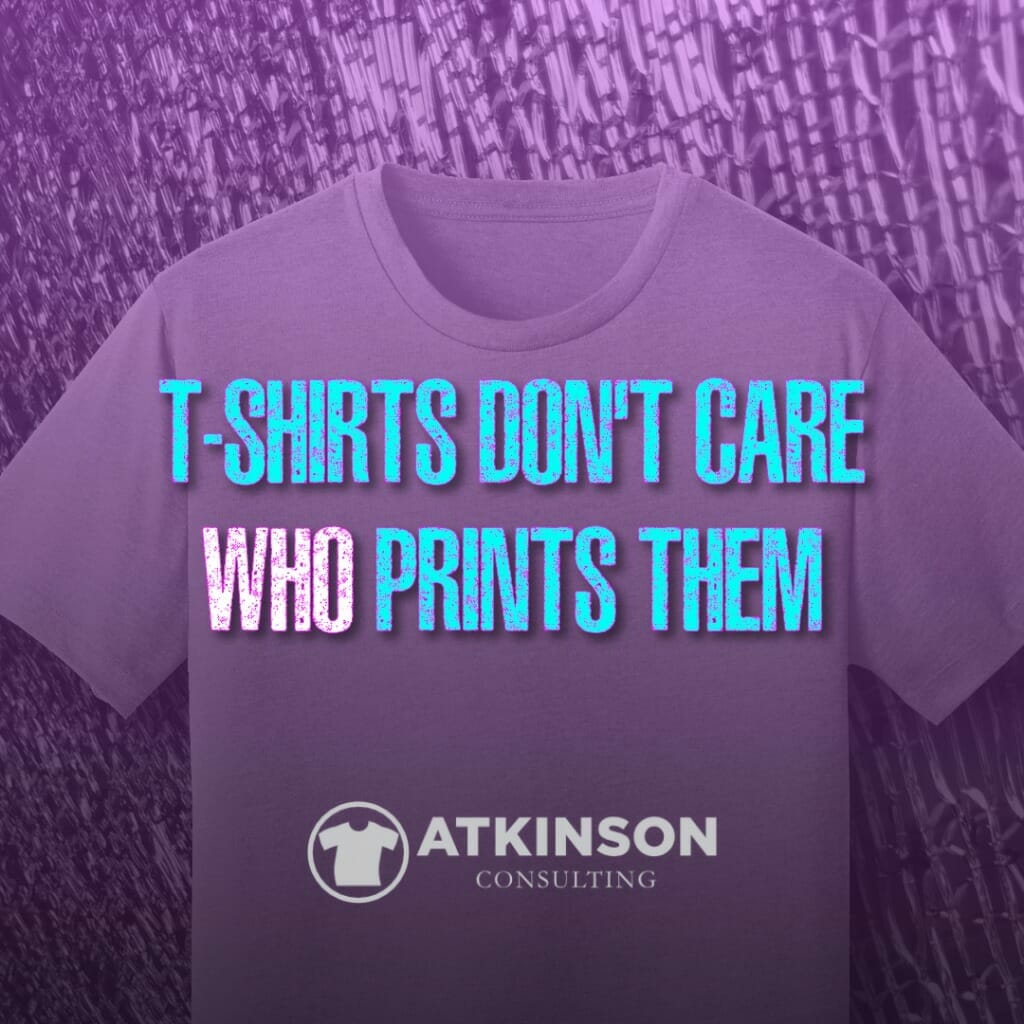 There they are. Stacked up on that cart. Or maybe you prefer a table.

Dozens of them. Hundreds. Thousands, maybe.

And there are even more still in the boxes.

What’s that sound? Beep, Beep, Beep. It’s the sound of the UPS truck backing up. Delivering more boxes of t-shirts to print.

It’s a tidal wave of cotton. Ok, there is some polyester in there too.

But all of these blank t-shirts have one thing in common. They need some sort of decoration.  Without it, they all look expressionless and empty.

T-shirts don’t care who prints them.

Who Prints the T-shirts?

Will it be Fred, the veteran manual printer? He worked for sixteen years in this industry before even printing any t-shirts for your company. Your sales team calls him the “Maestro”.

He’s been printing for so long he can do it in his sleep. One of the great things about watching Fred work is that his moves are similar to a dancer. Every action is choreographed and measured.

There isn’t any wasted motion.

Every tool Fred uses is within an arm’s reach. His feet rarely shift, but when they do it is only a sidestep or two.

He can churn through an amazing number of small orders and has to constantly be refreshed with new screens, inks, and t-shirts. On most days, he will produce between twenty-five to forty orders.

He’s a machine.  Which is why Fred is the highest paid production worker on the floor.

Fred sets up and registers screens with blistering speed, usually about two minutes per screen on average. He has almost zero downtime.

Fred has such skill that he rarely makes a mistake.

To speed up the process, he can self-approve jobs. Getting the production manager over to review his work before the job is printed just slows him down. He’s earned that with his talent and attention to detail.

Rush orders are staged the night before for Fred, so in the morning he can slam through them like a heated knife slicing through butter.

All the difficult jobs go to Fred. Two-ply nylon jackets that need the jacket-clamp? Printing that yoga studio logo on the waistband of some stretchy pants? Your entry into the next Impression’s magazine t-shirt print contest? He does them all with a smile on his face.

So what makes Fred so much better?

Like a golf swing, it’s all technique. Fred has printed an untold number of t-shirts over the years.

During that time, he’s mastered the art of the quick screen ink flood, coupled with the perfectly angled print stroke to match. He knows the secret is in controlling the squeegee angle, the pressure, and using his body in perfect balance like an athlete.

He makes it look effortless.

Sure, he’s got a grip that could crush walnuts, but the way he prints puts the perfect amount of leverage with his body so his arms aren’t the main force behind the stroke.

Each blank t-shirt starts off on the cart at exactly the right angle for him. He doesn’t even have to look when he’s loading a t-shirt, it’s all muscle memory. He loads each t-shirt on the platen with even hands and pulls back the t-shirt so the collar drapes off the front edge just so.

The screen drops down. He prints an exact duplicate of the print stroke he has been using for decades. It ends with the perfect flood stroke on the screen as it lifts up in one motion.

Part of the secret to his output speed is having a good support team. The shop crew feeds him the next pile of orders, t-shirts, screens, and ink. All he has to do is set up the job and print. Take down the job and start over with the next order.

The Out of Control Printer

Billy, on the other hand, has been printing t-shirts for five years now. He isn’t quite as long in the tooth as Fred, but he thinks he does ok.

Billy runs an automatic press crew for the shop. He learned to print at another company in town and came onboard for more money about six months ago. For him, that extra $0.25 an hour made enough of a difference to leave the company that trained him.

What he also brought was the bad habits from that other shop. This is just a career he backed into, and if someone offered him more money he would jump ship again.

Or maybe go back into construction. “A job is a job, you know.”

His idea of success is all about speed. How fast can he possibly run the press? He tries to beat his output from the day before. The other shop he worked for was all about numbers. His “craft” was drilled into him by a management team that barked orders all day like a dog.  Ok quality is good enough.

Billy runs his press so fast that he misses boards. He also is constantly going through press puller assistants, as they can’t keep up. In a half a year, he’s on number four right now.

He doesn’t understand why the shop keeps hiring these “lazy” people.

One big problem that the management team is constantly harping on with Billy is his overuse of spray tack. He doesn’t like to use a waterbased adhesive that you card on or apply with a roller.

Consequently, he does what he wants. The management team usually looks the other way as they have orders to ship. Or maybe they are just too busy with other priorities. That is until his new puller, in a desperate attempt to keep up, starts distorting the print on the t-shirt when he yanks it off the board.

Twelve or fifteen t-shirts go down the dryer belt before the catcher says anything. “Billy!”, she yells. He can’t hear her. Earbuds are in, and Five Finger Death Punch is freakin’ cranking, dude.

Eventually, the new puller grabs Billy by the shoulder and thumbs his attention to the catcher. Billy looks up and with a scowl because the move breaks his rhythm. “What?”, he growls.

By now, more t-shirts have been distorted and there are three foldovers on the belt. The puller just can’t keep up. Billy barely cares. It’s not like this is his money going down the dryer belt.

He makes a mental note to talk to the production manager, Steve, after lunch about getting a new puller. “This new guy sucks”, he thinks to himself. “Gotta do something about that”.

Rosie was one of the best catchers the shop had until last year. During that busy season, the shop’s second automatic printer broke his arm and couldn’t run the press while he was healing.

Seeing an opening to make more money, she stepped up and volunteered to give it a try. Nobody else wanted to do it. The shop posted an ad online, which is eventually how they found Billy.

Steve spent some time with her on the basics of running the equipment and scheduled easier jobs for her for awhile. In a few weeks time, she was already nearly matching the output of the other automatic press crew.

Now a year later, she has proven herself. When Steve fired Joe for constantly coming in late, Rosie became a solid choice.

What is interesting to Steve is that she works a lot like Fred. Calm and collected, with a steady rhythm. Billy seems to work in hyper-drive all day, and Rosie might appear to be moving in slow motion compared to his frantic rate.

But that calmness harnesses focused determination.

Steve has noticed that Rosie’s daily output consistently delivers more than what is expected of her. Not to mention she has fantastic quality. Reviewing the Production Log data, her set up times are about six minutes a screen now, and her downtime is usually low.  She outperforms Billy three out of the five days of the week.

Rosie’s review is coming up soon, and Steve has been keeping a close eye on her work. She’s a rockstar. In fact, last week she was showing her catcher, Maria, how to load t-shirts on the press.  She just took the initiative.

One problem that seems to be surfacing is the tension between Rosie and the new printer Billy.

Evidently, Billy has been making comments about her in the break room. It is disguised as good-natured fun, but Steve can tell there is an undercurrent of jealousy or something. Maybe Billy feels threatened by Rosie’s success?

In the meantime, Steve makes it a point to work with Rosie more and give her more support.

Then there is Tom, the owner. Despite having a full plate running the company, Tom likes to come out on the production floor and print. He knows he should be working on sales or marketing, but “slinging ink” keeps him grounded to the business.

He shows up early in the morning or stays late after the crew goes home. What makes him feel good is that he clears three to six orders a week off the schedule personally.

Sixty or seventy hour weeks make him feel like he’s intensely working “in” his business.  Nobody has ever questioned if he should be working “on” his business instead.  Tom makes it known that “he’s the boss”.  Nobody would dare question him.

Tom cherry-picks the orders that he wants to work on. For the most part, they are either easier jobs or ones that he has sold.

He likes the way that Steve has organized the production floor, with jobs staged today that have to print tomorrow. But Tom sneaks in and grabs an order or two and gets to work. On several occasions, Tom has forgotten to mark the jobs produced in the system.

Once he misprinted a few Bella tri-blend t-shirts and grabbed three dozen from another order that wasn’t due to ship until next week. He finished the job he was printing but failed to purchase the replacement t-shirts.

The day simply got away from him.

Steve and the Shipping/Receiving manager Laurie, spent hours trying to find the thirty-six t-shirts as they were checked in properly. They decided that someone on their team had stolen them.

It wasn’t until Tom noticed them reviewing the security camera footage, did he link what he did with the problem.

With a shrug of his shoulders, Tom dismissed their effort. “Sorry…”

He still feels that the few jobs he prints a week makes a difference. Just don’t ask Steve his opinion.

In your shop, what stories could be told about who is printing the t-shirts?

The “Who” in that equation can have an impact that may or may not be visible.

Are you asking the right questions?  The t-shirts don’t care who prints them, but your customer might.

Just something to think about.

“The difference between commitment and involvement is like ham and eggs. The chicken is involved, but the pig is committed.” – Maria Navratilova

“The dogs with the loudest bark are the ones that are the most afraid.” – Norman Reedus 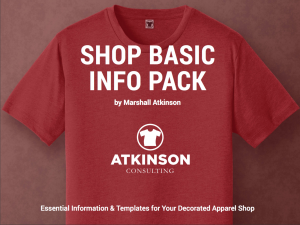 This eBook was written for shops just like yours. But it isn’t just a normal book.

It contains fully customizable templates for you to create a Business Plan, and a robust Employee Handbook.

There is a great section on Branding for your shop.

Plus for the production minded a customizable screen-print Production Log and Dashboard system that you can use to analyze your shop’s production. Get that data you need to interpret what’s going on on your production floor.

Click Here to purchase your downloadable copy today and start your journey to get to the next level for your shop.