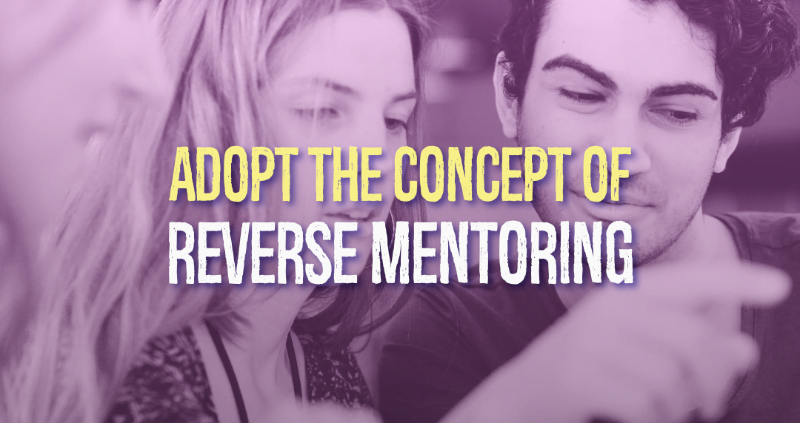 You’ve heard of that right?  That’s when an experienced old pro guides someone through to a faster solution, or quicker way to understand something.

I have my mentors and I’ll bet you do as well.  I’ve even mentored a bunch of people throughout my career.

But what about the concept of “Reverse Mentoring”?  No, that doesn’t mean they attach a suction device to your forehead and suck out everything you just learned.

Reverse Mentoring is when the new hire, typically a Gen-Z individual spends time mentoring the old pro Boomers (like me) or Gen-Xer’s on the new culture, technology, language, marketing, worldview, and a host of other ideas.

Back in the 1990’s Jack Welch, then CEO of General Electric realized that their senior leadership needed some help understanding the Internet.

500 of their top executives participated in the idea of a reverse mentor with an equal number of twenty-somethings to show them how to use it to their advantage.

That’s right.  Can you imagine having to be trained on the Internet?

Yep, it was a thing once.

Top of the Pyramid

Are you at the top of the pyramid in your company?  From way up there, how does everything look down below?

You are the king (or queen) of all you survey.

But yet, that pointy part of the monolith allows you to get knocked off your perch fairly easily if you are not ready.  I’m being a little dramatic, but it’s easy to ignore the new hires and lowest level employees.

After all, they don’t know anything about the company!  They just got here!

And that is the thing.

They just got here.  Their eyes are fresh.  The old fuddy-duddy way of doing things doesn’t make sense.  It’s clunky.  A struggle.  It’s a wheezing, coughing, rust bucket methodology that worked great up until a few years ago.

“Get a load of this…they still use paper forms!”

You have to make it safe for the new hires to speak up when they see something that just doesn’t look right to them.

So when they say, “Hey, I don’t understand this.  It seems dumb to do it this way.”  They just might have a point.

Are you listening?  Or, do you slam them down?

“Whoa, there buddy.  We’ve always done it that way around here!”

Instead, why not try out the idea of Reverse Mentoring?  Grab the new kid, and have them show YOU the ropes.  Ask them some quick questions like:

“How are you using technology?”

“What social media platforms are you and your friends using?”

“Anything around here look a little stale?”

If I’ve been to your shop, you’ve probably heard me say this to one of the team members:

“If you could change one thing about this place to make it better, what would you fix?”

Those brave enough to ask that question will be shocked at the variety of answers they receive.  Some folks just want a more comfortable chair.  Others, wonder why you can’t set up direct deposit for the paychecks so they don’t have to run to the bank and use up their lunch break.  Betty might just be tired of people constantly taking “her” tape gun.

But the new kids on the block will have the best answers.

“How come we don’t use Slack for communication between production and other departments?”

“Why can’t the customer enter this information so we don’t have any order entry work to do?”

“How come I can’t just order ink from my phone?”

“What is the company doing to invest in my personal and professional growth?”

Reverse Mentoring.  They have questions, you may or may not have answers.

For starters, it’s simply good practice to get conversations going.

Want to build a winning culture?  Get your A-team members together and get them talking.  Start off with simple.  30-minutes or maybe an hour once a month.  Pair off and start the mentoring process.

Hopefully, something really difficult pops up.  Something with some substance that is rarely discussed.

Let’s face it, that new hire that started last Monday is the closest thing you have to a customer’s brain.  But only for a short while.  For a few weeks, they still see the company outside in.

Anything that looks weird needs to come up in the mentoring session.  Along with ideas on what (and maybe how) to fix it.

But it won’t work if you are too scared to try it.

Let’s Break It Down

I’m sure some older employees might get a little insulted by a younger generation teammate trying to teach them anything.  Hopefully, you don’t have those stubborn old mules on your crew.

But I’ll bet plenty do.

So let’s get some “How to get a mentor pairing” ideas set up to help you get started with mentoring.

First Set Up the Ground Rules

Where, when and how will the mentoring take place?  Set up your program.  It could be as simple as eating lunch together on the third Thursday of the month.

What is the reporting mechanism?  Who is taking notes?

This isn’t like a dating site.  But still, you want the mentoring relationship to go well.  Offer suggestions on pairings based on some facts you know.  Common interests, backgrounds, hobbies, or job functions.  People should be able to pick their own mentor or accept a mentee.  Nothing forced.

All good things must come to an end.  Mentoring is one of them.  Make sure you set a specified duration.  I would suggest three to six months.

Lastly, It’s Not A One and Done.

People can have multiple mentors in your company.  In fact, that will help broaden the appeal and help everyone understand one another and communicate.

While you don’t want to be heavy handed with mentoring, as things should come natural, it is quite alright to have some suggestions or tips to follow.

These could be questions to ask or situational topics that have proven to be sticky.  From the new person’s perspective, what’s a better way to handle these problems that aligns with how they see the world?

Make sure you get feedback from your participants so you can make your program better.

“The delicate balance of mentoring someone is not creating them in own image, but giving them the opportunity to create themselves.” – Steven Spielberg

“Mentoring is a brain to pick, an ear to listen, and a push in the right direction.” – John C. Crosby

“With a growth mindset, kids don’t necessarily think that there’s no such thing as talent, or that everyone is the same, but they believe that everyone can develop their abilities through hard work, strategies, and lots of help and mentoring from others.” – Carol S. Dweck

By participating in my “The History of T-shirt Printing” eBook, you are helping others understand your journey.  Your story can inspire others.

Problems With Your Print? Check Screen Tension
Scroll to top