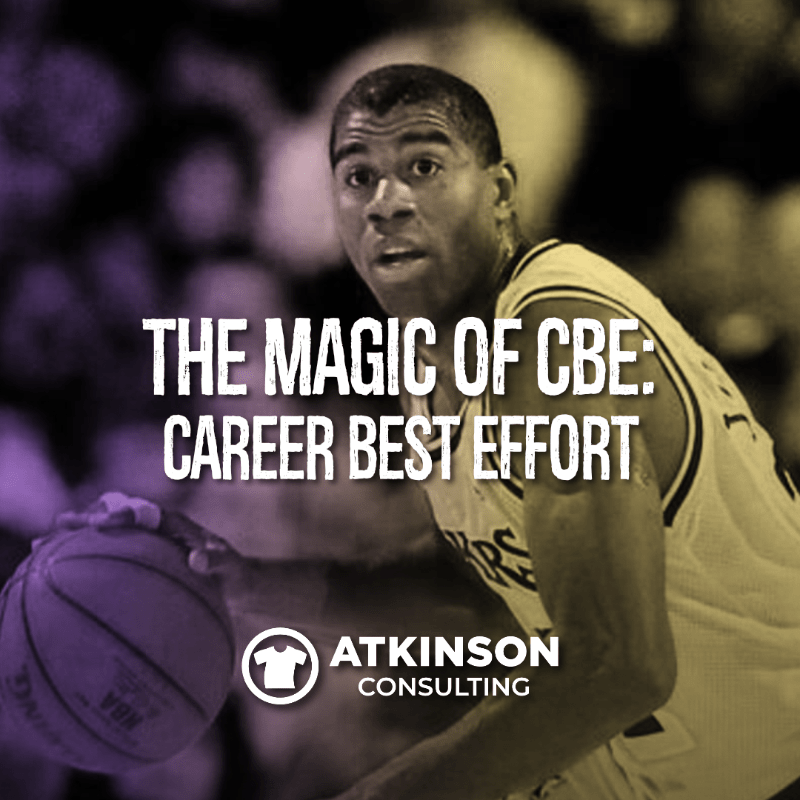 Today I want to share an idea that I just bumped into…Career Best Effort or CBE for short. Lately, I’ve been working with methods of gathering, using, and visualizing production data to help shops make better decisions.

That’s the fun and exciting work of bringing the Production Tracker app to life.

Earlier this week I was reading while eating my lunch. Not any book. It was James Clear’s “Atomic Habits,” which is something that I’ve actually already read twice.

The book is about creating and deploying strategies to build better habits in your life and work. A little more than halfway through there is a section about Pat Riley and Magic Johnson from the Los Angeles Lakers.

“In 1986, the Los Angeles Lakers had one of the most talented basketball teams ever assembled, but they are rarely remembered that way. The team started the 1985-86 NBA season with an astounding 29-5 record. “The pundits were saying that we might be the best team in the history of basketball.” head coach Pat Riley said after the season. Surprisingly, the Lakers stumbled in the 1986 playoffs and suffered a season-ending defeat in the Western Conference Finals. The “best team in the history of basketball” didn’t even play for the NBA championship.

After that blow, Riley was tired of hearing about how much talent his players had and about how much promise his team held. He didn’t want to see flashes of brilliance followed by a gradual fade in performance. He wanted to see the Lakers play up to their potential, night after night. In the summer of 1986, he created a plan to do exactly that, a system that he called the Career Best Effort program or CBE.

“When players first join the Lakers,” Riley explained, “we track their basketball statistics all the way back to high school. I call this Taking Their Number. We look for an accurate gauge of what a player can do, then build him into our plan for the team, based on the notion that he will maintain and then improve his averages.”

After determining a player’s baseline level of performance, Riley added a key step. He asked each player to “improve their output by at least 1 percent over the course of the season. If they succeeded, it would be a CBE or Career Best Effort. The Lakers sought peak performance by getting slightly better each day.

Riley was careful to point out that CBE was not merely about points or statistics but about giving your “best effort spiritually and mentally and physically.” Players got credit for “allowing an opponent to run into you when you know that a foul will be called against him, diving for loose balls, going after rebounds whether you are likely to get them or not, helping a teammate when the player he’s guarding has surged past him, and other “unsung hero” deeds.”

As an example, let’s say that Magic Johnson – the Lakers star player at the time – had 11 points, 8 rebounds, 12 assists, 2 steals, and 5 turnovers in a game. Magic also got credit for an “unsung hero” deed by diving for a loose ball (+1). Finally, he played a total of 33 minutes in this imaginary game.

Magic’s CBE number here would be 879. This number was calculated for all of a player’s games, and it was the average CBE that a player was asked to improve by 1 percent over the season. Riley compared each player’s current CBE to not only their past performance by also of other players in the league. As Riley put it, “We rank team members alongside league opponents who play the same position and have similar role definitions.”

Sportswriter Jackie MacMullen noted, “Riley trumpeted the top performers in the league in bold lettering on the blackboard each week and measured them against the corresponding players on his own roster. Solid, reliable players generally rated a score in the 600s, while elite players scored at least 800. Magic Johnson, who submitted 138 triple-doubles in his career, often scored over 1,000.”

What Does This Mean For You?

What if this industry had our own CBE number?

Pat Riley had statistics that he could use at his fingertips like points, rebounds, assists, steals, turnovers, and game minutes. He also used non-statistic concepts like the ‘unsung hero” moment to add to the mix.

For most shops, Key Performance Indicators (KPIs) are used to track production performance. The total number of units produced, downtime, set up time, misprints…to name a few. But what are the “unsung hero” moments that could be added? Here are a few that come to mind:

Can you imagine if this industry had a performance standard number that everyone used and agreed on?

For example, many shops are looking for experienced people to join their crew right now. Maybe someone is applying for a job in your shop right now. Wouldn’t it help to know if they are a 645 or an 879 type of worker? Especially if “salary commensurate upon experience” is used to negotiate the starting pay?

Or maybe there is a staff member that starts off in a junior support position, and over time they have learned some skills and are now a key part of the team. It would be interesting to build a career program where when they started they graded out around 430, but after a few years of training, they are now a 725.

This could also be used to compare staff members on your team in multiple departments. Possibly the rubric for the ratings could be based on contributions and not the decoration method?

How Would You Build Your CBE Rating?

I think that the Career Best Effort concept is an interesting one to consider.

Like Coach Riley, we want our employees to try their best to improve every day. If we were to establish a rating system, then it would be easier to challenge people to try to improve to get 1% better all of the time.

The question is what are you rating them on and how are you pulling in the data? You’ll want to make it easy to do, painless, and a completely neutral formula so it can be applied to anyone.

What would be even better would be to standardize something like this for the industry. Shops could compare their performance to other shops. Are we better, the same, or worse?

CBE Data is the Key

But what to measure to rate someone’s Career Best Effort? How do you compare a screen printer vs an embroiderer vs a heat press operator vs a direct-to-garment technician?

Magic Johnson with the Lakers had some easy-to-find numbers to use for his CBE. What would you include? What would you track if you were looking at sales, embroidery, DTG, DTF, receiving, shipping, or art?

Here are some of ours just for the screen printing production part of our industry.

So, let’s take a stab at an equation to generate a screen print production CBE number for a fictional screen printing press crew in a shop.

On Tuesday, here’s what the team accomplished:

So let’s noodle around with these facts.

Press 1 assigned 10 jobs, but only printed 7. At the end of the day, the only thing that matters is jobs produced, not the intent. So do we use just the 7 or use that they completed 70% of the assigned work?

I’m more inclined to use the 70% number than the 7. We want to push for jobs to be completed when they need to be, so I think that this is the more important number.

This seems obvious. What was the total number of work produced? By the way, does this have to be completed jobs?

I think this one is important for a screen print crew to measure. One crew that only sets up 1 job with 1 screen has a far easier day than a crew that sets up 7 jobs with 28 screens.

Also, note that a screen used for multiple orders can only be counted once. So if you are using the same back print for ten orders, you aren’t counting ten screens in the total. Just the first one for set up.

This is an important number. For a long time now, I’ve said that you want to get your shop to the point that they can start the screen registration process and get it under five minutes per screen. This is from the first moment the work begins with getting the screens registered until the production manager approves the job and you are ready to go.

There have to be some negative factors that we take into account. Misprints are going to be one of them. In the original CBE formula Coach Riley subtracted the number of turnovers and decreased the original CBE number from 34 to 29. That greatly affected the final score.

As quality is important, this has to be a factor in our equation.

Let’s use 17, but make it so that it affects the score.

Downtime in a shop is cancer that you are constantly fighting. The more time you are spending actually decorating a shirt, the more money you are making.

In this example, Press 1 had 187 downtime minutes during a 420-minute shift. The crew only spent 233 minutes printing. By the way, this meant that the auto was cruising at 496 impressions per hour. If they could have resolved some of the downtime during their day, maybe they could have printed all ten jobs.

Let’s see how this pans out.

The Original vs the New CBE Formula

Like Wordle, let’s see if we can guess at a working formula.

So, let’s modify it with the negative variables.

Therefore, if we round up Press 1s CBE number for Tuesday would be 236. If the crew had less downtime and finished all of their jobs, they could have had a higher rating.

Compare to Another Day

So let’s use the same formula and compare to another day for Press 1 where they are working on a different type of job.

Let’s see if this works.

So, let’s modify it with the negative variables.

Since the job was so large they didn’t complete it, let’s find the percent of what they completed and use that as the modifier. This is the same idea of using 10 scheduled jobs and only completing 7. 3,489/5000 = .6978

Therefore, if we round down Press 1s CBE number for Wednesday would be 631.

I don’t know if this works or not. I’m sure my thinking is flawed somewhere in here, but I’d love to know your opinion. This article just may be the start of something good!

Using this CBE method that I completely made up, on one day the same crew printed 7 out of 10 jobs scheduled and knocked out 1,928 impressions, and scored a 236.

The very next day, the crew only had one job to print because it was large and because at the end of the day they printed more shirts their CBE score was a whopping 631.

But think about it. It’s about how many shirts were printed, right? Isn’t one day more valuable than the other as the output was higher?

What would you change or modify? Is this even a good idea? What about the “unsung hero” points? How could you add that?

I’m very interested if you have an opinion or theory on how to actually make this work.

“Don’t let other people tell you what you want.” – Pat Riley

“Excellence is the result of always striving to do better.” – Pat Riley

“Giving yourself permission to lose guarantees a loss.” – Pat Riley