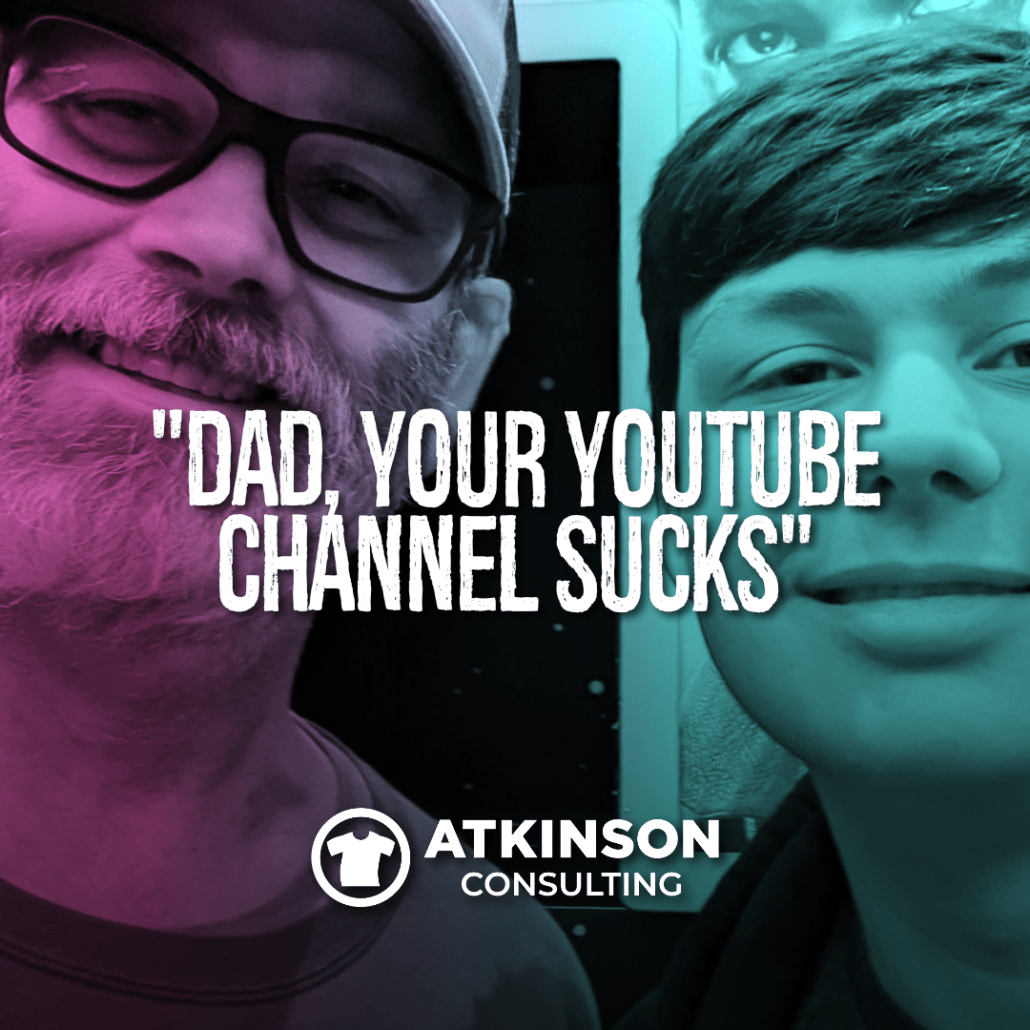 That’s what my 16-year old son Jack said to me one day a few months ago. Here’s the thing. He was right.

I knew I needed more video content. It actually had been on my mind, but like many other projects that needed to be completed, it simply didn’t have the priority. Sure, I posted a few videos. Maybe you were one of the four people that viewed them.

So like plenty of other businesspeople, I conceded defeat on YouTube before I even really got started.

It was Jack’s honest humor that hit home and made me wake up.

It was right then and there that Jack lobbied to become my company’s “YouTube Master.”

I asked him, “What makes you think you can handle this job?”

“Simple. I watch YouTube videos all the time. I know what works.”, said Jack.

So I hired my son.

The idea was easy enough to grasp. Jack would create, edit, post, and direct all the content for the platform.

Here’s Where We Started

To get going, I first wanted to establish what was wrong with the channel. I have to admit, I’m not really a YouTube viewer. But it really doesn’t matter what I do, it’s what my potential or current customers enjoy.

As much as I like to write, video is the long term play here.

Here’s why and with a statistic that I want you to grasp. Based on this 2019 study, by 2021 80% of the global internet traffic will be on YouTube. Yes, you read that right.

Which means that I really had some catching up to do.

I asked Jack to write a report on what was wrong, and what I should change. He did some research and created a four-page report with suggestions, images, and other details on what I needed to do.

One of the suggestions on the report was to use a tool from VidIQ, which is the leading software that helps you manage your channel. I immediately signed up and had Jack start with their VidIQ Academy to learn more about best practices for YouTube.

From there, we started the makeover.

The first step was to create better visually appealing thumbnails for the videos.

Here’s the before image of what the thumbnails looked like:

Jack reported in his analysis that having a better thumbnail was one of the top reasons why people viewed a video. Rich, bright colors that attract the eye were best.

Easy enough. Here’s what the video thumbnails look like now:

But That’s Not All

Jack then identified that one of the biggest challenges I faced was that I was not tagging my videos properly for search.

“When people try to find your content they can’t as there’s nothing for the search engine to find.”

I knew this already, as I tag my blog articles with search words and phrases. But I wasn’t doing it well for the videos, and it was inconsistent. The VidIQ platform makes this easy and even suggests the most popular tags to use for your video.

When we started this project the channel had 32 subscribers. On YouTube, once you get to 100 subscribers the channel lets you rename it with whatever you want instead of the alphabet soup name you are given.

That was our first goal. To get to 100 subscribers.

I offered Jack a bonus of $1 for every subscriber the channel received. His first question was, “Well, what if we get like 10,000 subscribers? Are you going to pay me the money?”

The answer, of course, is yes. Because then we can be monetizing the site and really doing some good things.

But we were at 32. And nobody was watching.

“Dad, your content is too long. Every show you push to YouTube is an hour. Nobody watches anything on YouTube for that long. You need to shorten up the videos.”

We created two new video series. The first was to help promote my new book, “Moving Past Disaster”. Each video would be a tip or advice from the book and be only a few minutes in length.

Here’s one of the videos in the series:

This has the new thumbnail strategy, and I’m also using this in my drip marketing and on social media too.

An Epiphany From The Food Network

I still needed to create some original content. A great idea came to me while I was watching the Food Network one weekend. They were promoting a revamped series, “The Best Thing I Ever Ate” during a commercial break.

I leapt off the couch! That’s it!

So, the idea for “The Best T-shirt I Ever Printed” was born. I immediately discussed this with Jack and jotted down some notes on what we could do.

Here was the main question. I didn’t have time to learn how to edit videos and put them together. Would Jack be interested in learning how to do this? It was a big question, and I wanted his commitment before I asked someone to be on the show.

I enrolled him in an online Adobe Premiere Pro course and had him start some basic lessons.

Jack’s On The Job

He really took to this new endeavor with relish. I started working on a new logo for the series, and he gave me some input on what he wanted to see.

I subscribe to a stock service called Envato Elements, and I knew that they had stock music and sound effects available. As Jack was in charge, he picked out the music.

Then, I collaborated with him on the opening title animation, which I built.

Once we felt we were ready, I reached out to a few industry friends to see if they wanted to get in on this new idea.

Seemingly, about thirty seconds after I sent the email out, Ryan Moor wanted in. Thanks, Ryan!

Here’s a proud Dad moment. This is Jack’s first attempt at creating a video. He created this from scratch, and it premiered on August 11, 2020.

I’ve watched this video a gazillion times now and it still brings a smile to my face as I know that my son Jack created this.

But what was so great was that a lot of new viewers not only watched the video but subscribed to the channel.

Exactly as we intended.

So here’s the thing. Do we have thousands and thousands of viewers and subscribers? No. Far from it actually.

This YouTube channel really is in its infancy. We’re just getting going.

You can’t have 10,000 subscribers until you hit 100. Which is a goal we accomplished a few weeks ago. This is a journey, and we are only a few steps in.

Jack is perfecting his craft and learning the tricks of video editing. He’s doing great, and we are subscribing to the philosophy of “Done is better than perfect.”

Here’s Something For You

I’d like to continue to do this series and keep Jack busy.

If you are a screen or digital printer, and would like to tell your story of the “Best T-shirt I Ever Printed”, I would love to have you participate.

Dig through your boxes, go through your cabinets, look under that pile of shirts in the corner and find that truly magnificent example. Then, click here and schedule your story to be filmed.

Jack needs more practice so he can master the video editing craft. And don’t forget to subscribe so he can earn that dollar bonus.

“YouTube at the end of the day is a search engine. That’s why Google bought it.” – Jake Paul

I also have been posting interview videos with people in the industry. These are live on Thursday’s and the show is named Forward Progress.

Here’s a sample video from my channel with Erich Campbell. Enjoy!