Skip to main content Skip to footer
Home » Change: Does It Hurt Enough?

Change: Does It Hurt Enough? 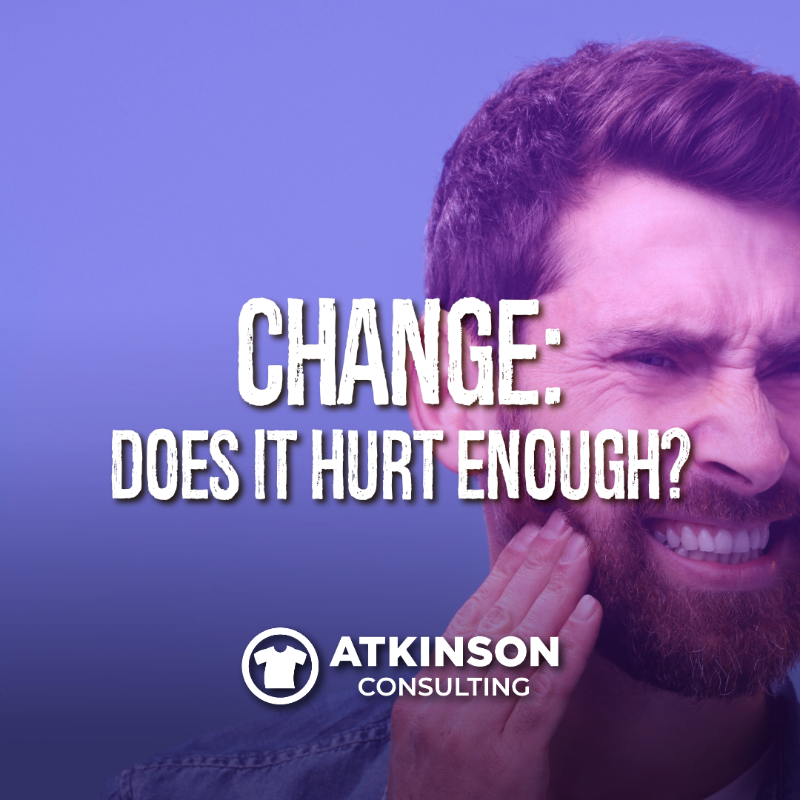 That was the punchline to one of Richard Greaves’ salient points from his Shirt Lab Ft. Worth presentation. This is in response to the question, “Why won’t you change?”

The Old Guard Hurts Too

For some, the status quo, even though painful, isn’t as scary as the fear of doing something new. They know they need to change something but simply can’t because they fear the situation will worsen if the new version fails.

If anyone in your company (or even you) have muttered these words, “That’s the way we’ve always done it,” that is often grounded in fear.

This is why some long-in-the-tooth employees grumble like Yosemite Sam at the thought of trying something different. These are the people that embrace the itchy blanket of what is familiar, but often outdated or wrong, instead of even thinking of learning a different way to complete a task.

It doesn’t hurt enough. They are numb to the pain.

Fear by the way, is an acronym for “False Evidence Appearing Real.”

The Truth is Buried

Occassionally I’ll speak to someone in the industry that fully admits that they are struggling. As a business coach for the industry, I’ll listen to their tales of despair, and then I’ll ask a few questions.

“Have you tried this?” or “What about changing that?”

I get some sort of the same response. “I would change that if we could, but we just don’t have the time.”

That is when I show them that the consequences of non-action actually are using up more time and resources than they way they are doing things now.

My job, after all, is clarifying effective change.

Often, this is where digging in on metrics and data and illuminate how to solve particular challenges or situations in shops.

What Can You Change Right Now?

Those small, nagging pain points that you are experiencing now can often be resolved with a series of tiny improvements. You don’t have to have major overhauls to make a difference.

A lot of small, cumulative changes are what adds up to significant improvements. These can pay off in the long haul. What can you do in thirty minutes?

Start with the easy stuff. The low-handing fruit. The unbelievably obvious.

Somewhere in your shop post a big whiteboard. On a consistent basis, record what hurts. Assign someone to tackle that challenge and add a due date.

“We are more often frightened than hurt; and we suffer more from imagination than reality.” – Lucious Anneous Seneca

Also, my basic elevator pitch to you is I’m that help with “Clarifying effective change.” If you need help and want to learn more, please schedule a discovery call here.