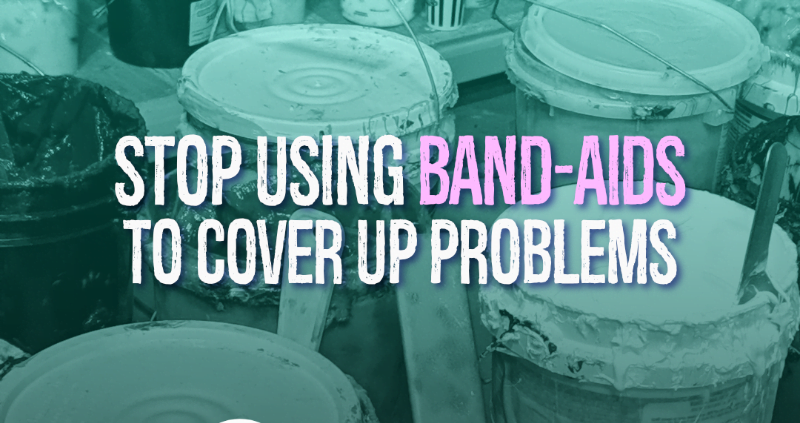 Band-Aid
Definition: an adhesive bandage with a gauze pad in the center used to cover minor wounds.

We’re obviously focused on the “makeshift or temporary solution” part of this definition. Although to some degree you could argue that using a temporary solution in your shop can feel like we’re covering up a wound.

And just maybe, it’s festering underneath too.

No, what I want to focus on this article today is how that “temporary solution” somehow became the norm for something in your shop. Nobody stops to think that there are a cause and effect to the decisions (or lack thereof) for situations that are present in your business that have an actual detrimental side to them.

First, let’s start with the fact that for some shops the ONLY way jobs go out is by having a production meeting every day.

Holy smokes what a waste of time.

This happens because there isn’t enough training, accountability, or professionalism in the building to look at a schedule and have every department make their own decisions to move the job forward.

It’s a crutch. And a huge band-aid that covers up the lack of leadership and training in the shop.

If you are mad and grumpy with me now and think “There’s no way!” that any shop can run effectively without a production meeting…I have news for you. Tons of shops do.

Do yourself a favor and do a head count at your next meeting. Multiply that with the sum of what you pay these people an hour. A five-person meeting where each person makes an average of $15 per hour costs $3.900 annually. That meeting in your shop might even cost more than that.

That’s a lot of cash tied up because nobody has set the initiative to build a better culture.

Start by trying to wean off of it. Next Friday, try to run your day without the meeting by having everyone do their own work looking into the schedule to see what’s needed. Build out some training.

Once you get it to work for one day a week, move to two-days a week. Then three. After that, suddenly you won’t need it.

You’ve heard the phrase “Money covers up a multitude of sins” before probably.

This is for the shops that have a lot of work booked, but because they aren’t efficient, they have to have a higher headcount to get everything out on time.

They just keep adding equipment and people to the problem instead of digging into why they can’t speed up the process. When you really take a closer look it isn’t that they need to speed up, but instead, work to get their vast percentage of downtime reduced to a reasonable rate.

Remember downtime is the amount of time NOT spent decorating a shirt.

For plenty of shops, they don’t have a way to control their people during the day and hold them accountable for their time. So, their crews wander around “looking” for things to do, get the right tools, or anything other than getting work completed. Nobody is measuring the output, so there are zero emphases on improving anything.

Instead, more workers are hired to get the work completed. This leads to headcount bloat.

How do you stack up?

For a quick assessment, multiply your headcount by $100,000. That should roughly equal your total sales volume.

Does it match up? Good.

If you have a lot of automation and process controls you can get your number to creep toward $200,000 per employee.

But if you are way under, you may need to ask yourself why you are so heavy with your labor? Do you have multiple people in one department instead of just having fewer really good employees?

Can some sort of automation or outsourcing achieve the same result with less payroll?

For many shops, on an automatic press, they can’t get decent opacity with their ink on the shirt without double stroking the squeegee pass.

I’ve seen it where for an underbase white, color, and final wet white print, the amount of ink going down on the shirt is incredible.

First, the underbase white is printed with a double stroke. Then it is flashed.

In revolver mode, the entire run goes around and then it’s double stroked again with the white. Flashed again.

Then two hits of the color with an accompanying flash hit, right before two more passes of the final white.

What should be three strokes of ink churning out a shirt every five to seven seconds, is now slogging along due to the revolver-mode-double-stroke circus of eight ink passes.

Does it seem normal?

I spoke with an automatic printer once who told me that he’s been printing this way for over a decade. It is the only way he knows how to print.

When I asked why he told me, “Because that’s how I can get the ink to be opaque and look nice.”

With this many variables, it is a wonder that they can even get the image to look right. Hence, why they deploy all of those screen-printing band-aids.

If you are remotely interested in learning how to yank this band-aid off cleanly, take a class at the next trade show available to you. My buddies Alan Howe, Charlie Taublieb or Lon Winters can set you straight. (Among others in the industry)

A common problem in this industry is the lack of direction for sales. Many, many shops operate every day without a business or marketing plan intact.

What about your shop?

So, instead of going after clients and work that will bring them high-value, highly profitable work, they fill up their schedule with low-value, low-profit work. “Just to keep the presses spinning”.

Like a vicious outer-space body-snatcher movie, that’s when that low-profit work slowly creeps in and takes over your entire schedule. You are so busy defending your schedule with the idea that you are busy, that you have never looked up once to consider if you are profitable.

Being busy does not equate to making money.

Plus a lot of shops don’t even know how to calculate how to price anyway. This is why you see incredibly busy shops simply go out of business one day. It’s a shock. But in a way it wasn’t. They simply couldn’t afford to be that busy any longer.

Do your shop a favor. Spend some quality time focusing your business at the exact sales bullseye you want to hit. Build a marketing plan that builds a sales pipeline to your door with quality, profitable orders that make sense.

The “We Can’t Put Them On Credit-Hold” Band-Aid

You hear this from salespeople all the time.

So and so owes you money. Sometimes a lot of it. They are way past 30 days, but the sales guy is lobbying to take another job…and it’s a big one!

Hold on there cowboy.

A customer that doesn’t pay you isn’t a customer. They are a liability. Some would even call them a deadbeat.

Accepting another order from them only exacerbates the situation. How are they going to pay for that next order (Remember, “it’s a big one!”) if they can’t pay their current debt? Here’s another reason why shops go under.

Falling for this craziness.

Instead, I want you to repeat after me:

100% of the money upfront for all orders.

“But Marshall, we can’t do that!” Our customers have to pay with Purchase Orders or credit terms. It’s the only way they do business.

Do they buy from Amazon? Ever bought a plane ticket? Hotel room? A meal at a restaurant? Attended a conference?

Other industries get their money up front and you can too.

Why don’t they take a PO or work on credit terms? Because they have a policy and rules stating how they do business.

While I was writing this article, someone reminded me how some shops keep using screens well past the usability of the screen.

For static frames, the mesh tension drops below an acceptable level (For me, under 18 N/cm). Or there is a tear in the screen and they fix it with a chunk of tape.

For that shop (yours?) they want to keep using that frame because it’s too expensive to get that frame remeshed.

My friend was lamenting that some shops have their financial priorities upside down.

Here’s what he meant.

It costs between $18 – $35 a frame to get it remeshed, depending on the size of the frame, mesh count, and who is doing it. Most shops value their press time at about $300 – $400 per hour in opportunity costs. That’s how they make their money.

But because they are looking at the problem backward, they don’t realize that every minute that they aren’t actually printing a job that’s costing them money. A low tension screen, or one that has a defect in it, can cause registration challenges on a press.

So they would rather screw around with that screen, wasting valuable press time, trying to get it to line up…than simply restretching that frame and making sure it was working properly.

It’s the age-old problem of stepping over a dollar to save a dime.

Do things the right way.

“By failing to prepare, you are preparing to fail.” – Benjamin Franklin

“It’s easier to prevent bad habits than to break them.” – Benjamin Franklin

Need Some Help With That Band-Aid? 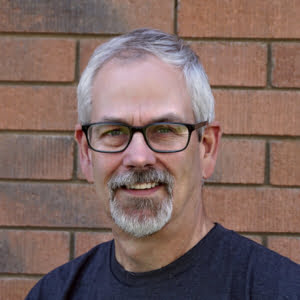 For some shops, they want to do things themselves. I get it. This is a DIY industry.

However, there comes a time when you might be ready to reach out and have someone help you rip that band-aid off and move you into a better, more efficient, future.

That’s what I do.

If you are ready to work on those challenges, then let’s set up a time to chat.

I’d love to hear about your shop. Your journey. Struggles. Challenges. Dreams.

Let’s discuss how a solid coaching program or an onsite visit can help solve those challenges for you permanently.

Stop adding band-aids to cover up your problems.