There’s No Award For Being Busy 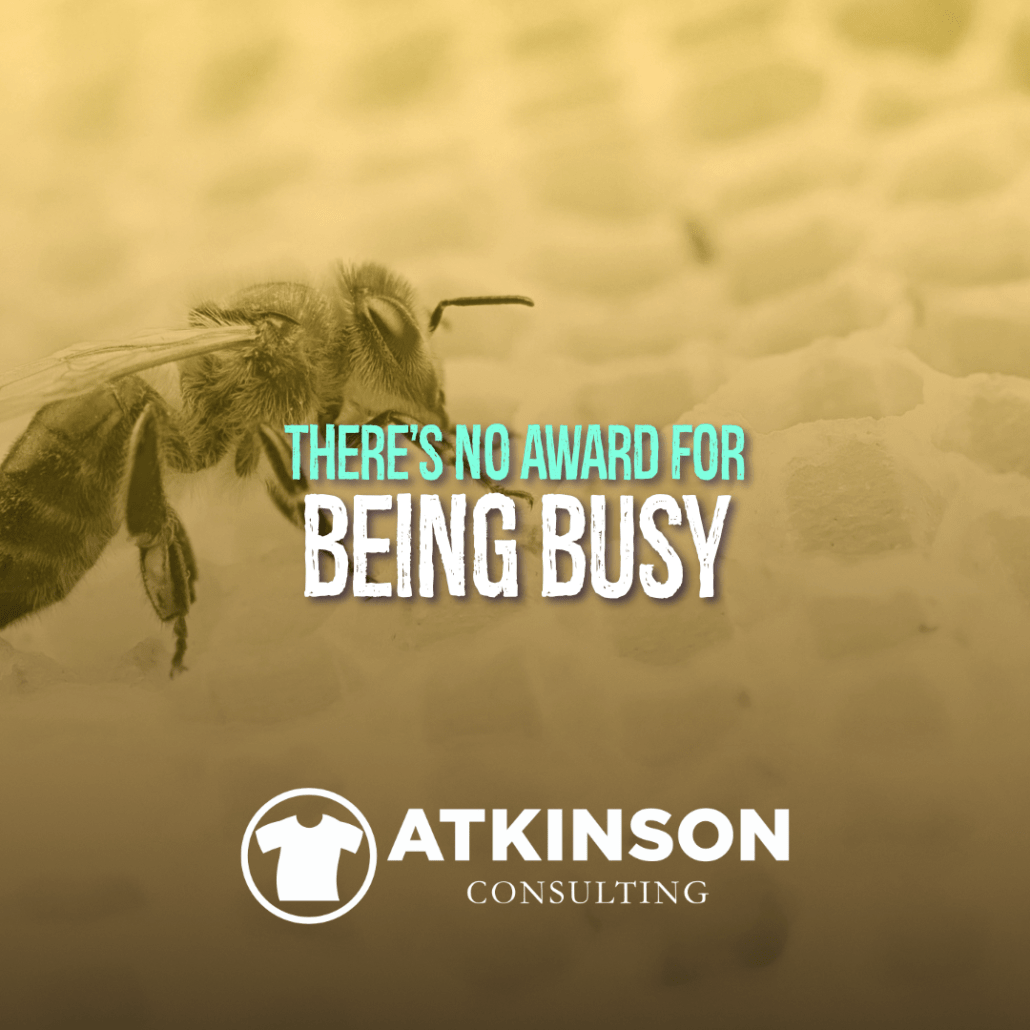 Quite often I ask a shop owner, “Hey, how’s it going?” The usual response is, “Great! We are so busy!”

But are you making money?

That is a different concept entirely.

Here’s why I’m bringing this up. A few days ago a shop owner scheduled a time to chat with me about his shop. He had purchased my eBook, “Price for Profit” and had completed the exercises on determining what it actually cost him on average to screenprint a shirt.

The numbers floored him.

Like a lot of shops, he is a mix of full-retail pricing and contract work. He started bringing in contract stuff “to keep the presses moving”.

Now it’s a good chunk of his business.

For pricing, he’s charging what he’s always been charging. The reason he bought the book is that he had a sneaky suspicion that his pricing has been off. Originally it was based on what “everyone around me was doing.”

Now, with a shop loaded with equipment and people he’s busier than ever…but not making the profit he wants to see.

Hence the need to dig into his numbers. He did the right thing.

What He Found Was Shocking

That’s why he wanted to talk to me. “This can’t be right!”, he said. What it actually costs me on average to print is more than what I can charge for contract printing.

He’s filled his schedule up with contract jobs. It’s the classic case of busy being busy…not busy being profitable.

This is how he realized that he needs to move into a different direction for his business. Using the right tool can do that.

Why Math Is Important

There are two types of people.

Math people that dig getting into the numbers, because it’s fun!

And Non-Math people that avoid it like a week-old moldy ham sandwich on the sidewalk of New York City.

I’m in the Non-Math group. Way back in my caveman days, I was an art director. That side of my brain is what works better. Math? Fuggetaboutit.

That all changed when I started moving up in my career into the operations side of the industry. The old adage, “You can’t manage what you don’t measure” is absolutely true.

Numbers are your friend.

If you don’t know your numbers you are essentially lost and just guessing. Which means, you guessed it, doing some math.

Sadly, very few shops in this industry have their fingers on the pulse with their metrics. It is simply easier to just check the bank statements to see if they are making money.

How do I know this? That’s what you guys tell me just about weekly during a phone chat with anyone who wants “to figure things out with his shop”…or “help me get to the next level”.

I hate to tell you this, but a huge chunk of the work that you are bringing in isn’t driving solid profits to your bottom line. It’s just not.

You need to dig deeper.

Shops that are in the contract decoration game and are successful at it, are the kings of measuring and knowing their numbers. They are profitable because they know what they are doing. They have things dialed in.

If you are dabbling in “contract” to try to fill out your schedule, and you truly don’t have a clue what it costs you to run those jobs you are fooling yourself.

You can’t just use your normal price list and think you are making a profitable difference to your bottom line.

Also, maybe you don’t ever run any contract work ever. That doesn’t mean you are off the hook either. Are you doing what it takes to understand what it costs you to run your business, your operational efficiency, and how they are linked to how to build your pricing?

Want more money at the end of the quarter? Start by understanding your math.

If the math doesn’t make sense, you need to make some changes. Be busy being profitable.

Which means that you may need to start charging more for your work.

“Sorry Marshall, but I can’t do that. My customers won’t go for it!”

I hear that all the time.

Here is something to think about. Are customers that don’t value what you bring to the table good customers to have?

Or, are they your customers because it is harder to find ones that will pay you more?

Maybe you have a problem articulating why you are worth more money? That’s that whole “sell on value” thing you’ve heard about before.

Think about it this way. On your schedule right now are jobs that you know that you had zero business accepting. They are stone cold turkeys.

But you took them anyway. “Because”.

Because You Want To Be Busy

This is like a disease. Look how busy we are!

“We are working until 3:30 am all this week just to keep up! Saturday too! Maybe we should look at getting some more equipment!?“

There is no award for being busy. (Except maybe burnout)

I sort of wish there was an award for being the most profitable though.

Wouldn’t it be nice to work half as hard for twice as much?

What if you wrote your business plan and pushed your effort into doing that?

Can you imagine what it would take to scale down your production, but ignite record profits simultaneously? When have you put some work into building that?

Most shops don’t do that. They spend their time chasing the next easiest thing that comes along.

Which is why potential customers sometimes see this industry as a commodity. When dozens of decorators are fighting over the same customer, that customer will always have the pricing leverage.

Unless of course, you offer something different.

How unique is your shop?

Trust me, anybody can decorate a shirt. This is an extremely easy industry to get into and the cost to jump in is minimal.

Succeeding and having solid profits? Much harder in the long term.

Having the customers chase you because you are so incredibly awesome? A different story altogether.

The Plan For Profitability

So, are you upset yet? At me? Yourself?

Starting down the road towards better profits is easy. Actually getting there is much harder. That’s because it requires a few things.

Are you up for the challenge?

It’s ironical in a way. I speak with shop owners all the time and they tell me that they know this stuff. “This isn’t anything new”, they say.

A year later they are still complaining about how they aren’t making enough money…but they didn’t do anything differently. It’s like they are shackled to their thinking.

If you want a different outcome, you have to make a change. Hoping things will get better doesn’t work.

This is why you are still stuck in the mud dealing with the same low-profit issue that you have been losing sleep over, seemingly forever.

Get a handle on your shop’s math.

“Life is what happens when you are busy making other plans.” – John Lennon

“Quit being “busy” and start actively owning and operating your company, and you’ll be able to understand where the money is coming from and how to make more of it.” – Michael Gerber

“We speak continuously of saving time, but time in its richness is most often lost to us when we are busy without relief.” – David Whyte