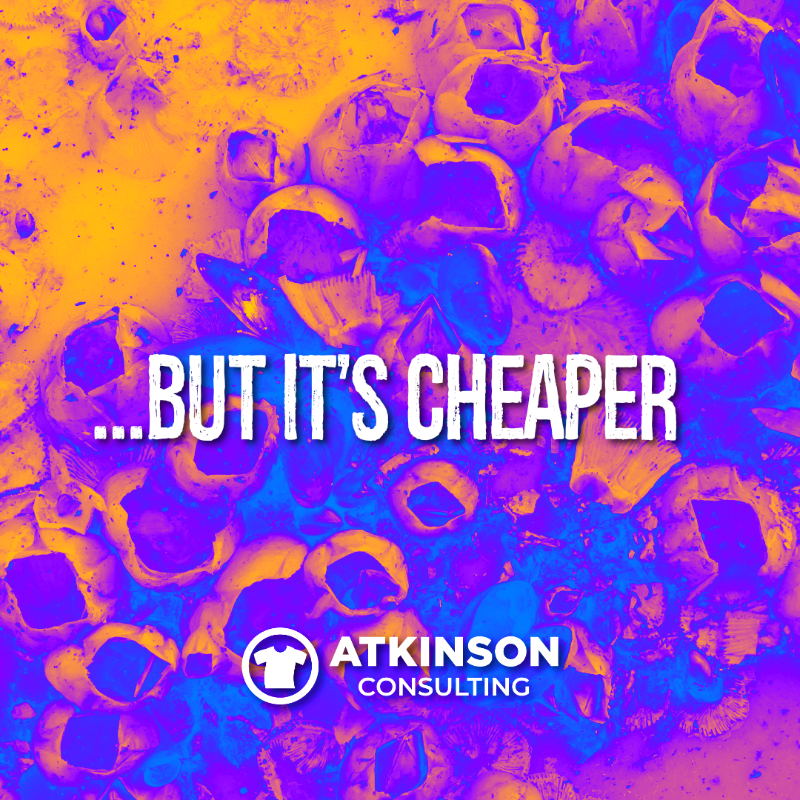 “Then the discussion turned to the reason why they went somewhere else was that it was cheaper.” This was a statement made by one of the Shirt Lab Tribe members during a recent open Q&A call for the group.

A customer decided that even after years of doing business with them, they would send the job to someone who would get the 100+ custom athletic jerseys made in China. Because it was cheaper.

Never mind that their jerseys didn’t show up until a few days before the last game. Or that they had to get “temporary” shirts made so they could play in games. And let’s not forget the fact that they sent money outside of the community.

…but it was cheaper!

Has This Happened To You?

In the comment section, leave your story. It would be interesting to collect the tales of disaster where customers left for a nickel and then came crawling back when their cost-savings solution failed.

This industry is rife with tales of woe that mirror this scenario.

I think people are familiar with the concept of saving money. Let’s face it, we all do it.

So how do you counter this challenge when it lands square in your face?

First, have a discussion with the customer. Before you talk price, ask them what is the most important thing about what they are trying to do? What is crucial?

For an athletic team, it has to be the delivery date. An order of shirts that show up right before the last game isn’t supporting the team in any way. In fact, you could label that a disaster. You are not saving money, you are actually spending more money, as now you need that “temporary” set of jerseys for the league.

Emphasize your record of 100% on-time delivery. Talk to your customer and let them imagine what it is going to be like to start the season without team jerseys.

“Can you imagine how awful you are going to feel when you have to face the players and their families and tell them that the jersey order is stuck on a container ship somewhere in the Pacific and that you did it to save a buck?”

Sometimes it actually is “you get what you pay for.”

It might be easy for a coach or league director to sit in their underwear and make the decision to order the league jerseys from a website at 11:47 pm in the evening. After all, the digital mock-up looked great.

“Bingo! That order is complete!” they say. Then, they forget all about it until about a week before the season starts. A few days after they realize that the shirts won’t make it, that’s when they call your shop in a panic sweat.

Then, when eventually the shirts showed up with one game left in the season, the final quality isn’t what was expected. They were not true to size and fit small. The decoration quality has issues. A few of the shirts were missing, and as Murphy Law would dictate, they were for the star players.

The Circle of Value

Sending anything to China can mean trouble down the road. These days, who knows what will happen?

One of your business’s positive attributes is that you are in the neighborhood. Money spent here stays here.

You can handle the design work. Your shop has been printing the colors for the team (or business) for years. Every week, the money you pay your staff shows back up at the grocery or hardware stores or the car dealership. Every year, the schools in the area want businesses to buy banners and spend money on ads in the event programs.

So why are they sending dollar bills outside of the community? How is that helping anything?

Mirror What Is Important

If you face a similar scenario, try mirroring what they told you was the most important order.

You: “So Coach, it seems like having all of the shirts for the league before the season starts is important to you, correct?”

Coach: “That’s right! Here’s the date we need them by. It is crucial, as league play starts a few days later.”

By having the coach label exactly what is most important to the success of the order, you are automatically defeating the “have to get it cheaper” mentality.

Shore up this line of thinking. Remphasize that you don’t miss deadlines and are local, should anything go astray. You can also point out the other factors of how you work, such as your quality control program, and the fact that each set of team uniforms for the league will be clearly labeled and divided up, and packaged by player for easier distribution by the coach.

Other Ways to Counteract the “I can get it cheaper” Statement

What do you think?

How have you dealt with folks that always want things cheaper, only to learn that their decision to go somewhere else failed them?

“If you want a guarantee, buy a toaster.” – Clint Eastwood

“Money can buy a fine dog, but only love can make him wag his tail.” – Kinky Friedman