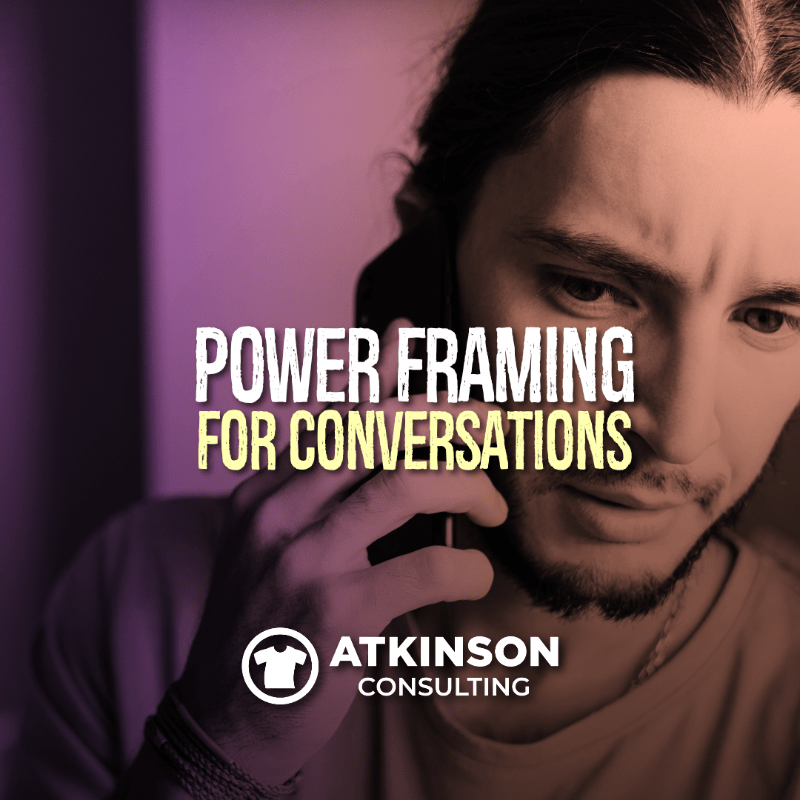 This article is about framing conversations so you can communicate more effectively. If you are like most people, we listen to respond, not to communicate. Very little thought is put into actually what we are saying.

It just gets blurted out.

First, What Is A Frame?

Framing a conversation is all about word choices, and how you build the conversation around them. It is positioning the line of thought by using specific words to focus on the context of what you are trying to get across.

This could be with short, punchy phrases, or with a story. Your conversational frame gives you the backdrop for what you are trying to discuss.

One of the conversation frames that I’ve been using for a few years is what I call “The Hamburger Story.” This frame focuses on the idea of not selling based on price, but on customer experience instead.

“Right now, and within a few miles of you there probably is a McDonald’s hamburger fast food restaurant. There, you can walk in or drive up and buy a hamburger for $0.99.

Also, within a few miles from you is a local grill, sports bar, or local joint that sells a hamburger for $14.

So, if you can buy a hamburger for less than a dollar, why would anyone want to pay fourteen times more for it?

It’s not about the hamburger. It’s about the experience. That’s what that local joint is selling.”

By using the framework of a comparison between McDonald’s and the local bar and grill, the conversation can naturally turn to how to market that experience for the business.

The words that another person uses in the conversation are important for you to observe. Especially if they are anchoring their thought position. The trick is to not use their words, but instead, get the conversation turned by getting your opposite in the dialog to use your word choices.

In his book, “Don’t Think of an Elephant!”, George Lakoff writes, “When you are arguing against the other side, do not use their language. Their language picks out a frame – and it won’t be the frame you want.”

And it gets deeper too. Lakoff says that people come into the conversation with their own myths about what is true.

“The truth will set us free. If we just tell people the facts, since people are basically rational beings, they’ll all reach the right conclusions.

But we know from cognitive science that people do not think like that. People think in frames…to be accepted, the truth must fit people’s frames. If the facts do not fit a frame, the frame stays and the facts bounce off.

Neuroscience tells us that each of the concepts we have – the long-term concepts that structure how we think – is instituted in the synapses of our brains.

Concepts are not things that can be changed just by someone telling us a fact. We may be presented with facts, but for us to make sense of them, they have to fit what is already in the synapses of the brain. Otherwise, facts go in and then they go right back out. They are not heard, or they are not accepted as facts, or they mystify us: “Why would anyone have said that?” Then we label the fact as irrational, crazy, or stupid.”

This is What Happens in Real Life

I know this has happened to you. Something you have discussed with someone, whether it is about business, personal matters, politics, or even where to go for dinner…ramps up with emotions and ends badly.

Despite the evidence that you presented actual true facts, the person you were talking with doesn’t believe you. They keep saying the same thing to you, and you keep arguing your side of the conversation back to them.

The problem is exactly what Lakoff describes. It’s their mental framework that is holding their position, not the truth.

Change the Conversation With a New Frame

Feeling stuck? We’ve all been there kiddo.

Next time, try changing the frame of the conversation and stop arguing the facts that are bouncing off the other person like fired bullets aimed at Superman’s chest.

Remember, A Frame is Contextual

It’s not about facts. There is a story lurking in there somewhere that will resonate with the person.

Dig a little deeper and try to understand why they are saying that? Do they have to justify the purchase to another person? Maybe they believe those “Facebook Experts” about something. Where does that anxiety about buying come from in this situation?

Touting facts and benefits isn’t going to win them over.

A better framework will. Your job is to uncover the contextual story that will ring true to them.

This is why referrals, recommendations, and even social influencers have so much power.

You might not go to the new restaurant and try their Bison Chili Nachos until someone in your friend circle exclaims that it is the best nachos they’ve ever tasted!

That’s when you pull the trigger on that sweet nacho action.

So the next time you are at an impasse in a situation, quit arguing. Start reframing the conversation.

“Every man should frame life so that at some future hour fact and his dreaming meet.” – Victor Hugo

“Motivation is the art of getting people to do what you want them to do because they want to do it.” – Dwight D. Eisenhower