Skip to main contentSkip to footer
Home » Thanks for the Sale!

Thanks for the Sale! 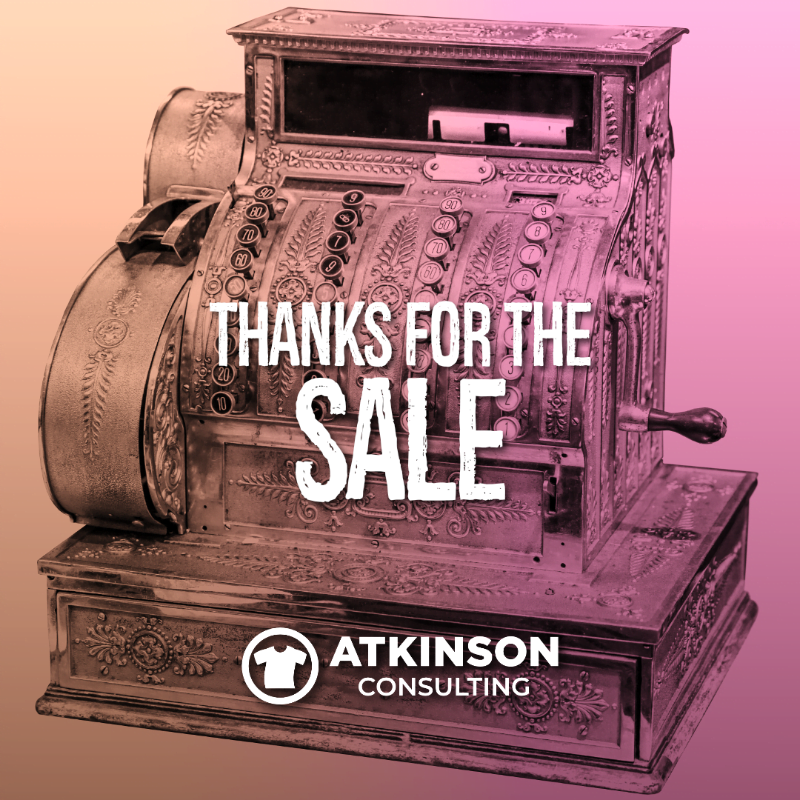 Once upon a time, a t-shirt was sold. Along the way of that sale, there are some people behind the scenes who wanted to say thank you.

Hank, a Dooly County Georgia cotton farmer, tended the land and grew the upland cotton crop. It was harvested a year ago, and the cotton tonnage was sold, ginned, to be knitted into yarn and fabric. When cotton prices are higher, Hank will plant that crop. When the forecast for cotton looks a little dimmer, he will usually plant peanuts. As he makes more money for the cotton crop, he appreciates the sale of that t-shirt.

Tony works at the Cochran cotton gin in Georgia. The gin mill runs 24-hours a day, and Tony works as a forklift operator on the second shift. The gin separates the cotton fibers from the cottonseed and other particles. The cotton fibers will be used for fabric, and the cottonseed will be processed into cattle feed or oil. Tony doesn’t think much about where the cotton will end up, but he appreciates the sale of the t-shirt as that supports his industry.

Paloma was one of the thousands of workers that turned that cotton fabric into a blank t-shirt in Cortes, Honduras. Upon arrival, the greige fabric has to be dyed, cut, sewn, sorted, packaged and made ready for shipment. She has been working at the apparel manufacturer for just over three years now. She works in the sewing assembly area and specializes in sewing t-shirt sleeves. Paloma often wonders who ends up buying the t-shirts that she helps make every day and always appreciates the sale.

Francisco works on a container ship that transports goods from one port to another. That t-shirt that was just sold was once part of the cargo on his ship. It left Puerto Cortes, Honduras, and was unloaded as part of a container that was packed floor to ceiling with t-shirts. The ship was unloaded in Miami, Florida. Francisco works in the galley of the ship and helps prepare the meals for the twenty-three-person crew. He likes his life aboard the vessel, primarily because it got him out of the dangerous circumstances of where he grew up in El Salvador. He never thinks about what is in the containers, but always appreciates that the ship is working.

Jerry loves his job unloading container ships in the South Florida Container Terminal in Miami, Florida. Perched in the cab of the crane high above the port, he specializes in hoisting the containers off of the ships and placing them gently down on tractor trailer rigs. It is a monotonous, but fun job and Jerry thinks it has a game-like quality to it. Jerry is feeling the pinch currently due to the COVID-related shipping challenges but is appreciating the overtime. Jerry is a funny guy, and while he might not overtly thank you for the sale of that t-shirt, he would take you fishing.

Mary has been driving big rigs for a few years now and loves the independence it brings. She thinks that she and her companion dog Buster have listened to more Audible books than any human alive. Unlike Jerry and Francisco, Mary knows what is in the container as she has the bill of lading that describes the load. She likes this pick-up as it is an easy drive for her from Miami to McDonough, Georgia where the apparel distribution center is located. A little southeast of Atlanta, she can make the trip in about ten hours. Mary appreciates that t-shirt sale, as it keeps her and Buster on the road.

Ash has been working and designing website applications for five years. Like a lot of people, she backed into her career and found her calling. She specializes in user experience or UX for short. When that t-shirt was sold, if Ash was there she would high-five the customer as it was her creativity and skill that allowed for a more frictionless experience. Anything that is sold via her work always brings an enormous smile to Ash’s face. As a woman in a male-dominated industry, Ash loves to score victory points.

Vicenzo designed the graphic for the shirt. He’s been a designer for over fifteen years and loves his job. Every project has a puzzle-like quality to it. His job is to pull the design elements together and give it a creative spin. To him, this is just about the most fun you can have while working. Vicenzo keeps track of the shirts that sell the best, as he sees those as “votes” for what to design next. If he could, he would thank you for the sale as that confirmed that his latest design idea worked. Not all of them do, and that’s ok. Designs that don’t sell are data as well.

Gabriella works in the inventory control area of the t-shirt printer. Thousands of t-shirts are arranged on shelves in bins by manufacturer, color, and size. She uses a small tablet that routes her through the maze of shelving. She picks the garments one by one according to the steps on her viewscreen. Then she applies a small barcode sticker to the neck label of the t-shirt. The sticker is from the shop’s system and is used to not only track the shirt but pull the design that Vicenzo created at the print station. Gabriella doesn’t think much about where these shirts are going, but if she met you she would give you a big hug for supporting her family because she’s a hugger.

Roberto works as part of the crew at the print station. They rotate positions every week to displace some of the monotony of their work. On the t-shirt that this article is about, he was operating the pre-treatment loading position. The shirt that Gabriella pulled was one of many in a stack on a gray cart. When Roberto pulls it off the cart and expertly places it on the pretreatment conveyor belt, it is probably an hour or two after she loaded up the stack. Roberto scans the shirt barcode and the design is projected down onto the shirt. He jockeys the shirt for the best placement for the pretreatment spray. A lot of times Roberto is envious of the people who end up wearing the shirts that he helps print, just because he likes the artwork. Maybe one day he could be an artist like Vicenzo.

Maria pulls the shirts down from the conveyor dryer and gets them loaded onto one of several direct-to-garment t-shirt printers in her print pod area. The shirt barcode is scanned again, and the correct design is pulled up on her viewscreen. She quickly loads the shirt onto the printer platen and adjusts it into place. Maria hits the start button and moves on to the next shirt to be printed. After the printer finishes, she plucks the shirt from the printer and drapes it onto the dryer conveyor belt. Maria enjoys her job and loves the people she works with, especially Gabriella, who Maria thinks is hilarious. They have eaten lunch together every day for two years now. And if Gabriella is hugging you for buying that shirt, Maria would be saying thank you the same way probably.

Dani is at the end of that conveyor belt and with a few quick flips of her hands, has the shirt folded and into a mailing bag. The shirt barcode scan provided the information for the mailing label, and it is affixed to the bag. After Dani has processed the order, she tosses the package into a big rolling bin. This gets wheeled onto a truck trailer that is coming later in the afternoon. Dani is very business-like in her approach to work. She handles the quality control step and is the last set of eyeballs to see the orders from her print pod. As a single mom, she appreciates every order as she knows it puts food on her table. Dani says thank you on behalf of her kids.

AJ works as a truck driver for the postal service. An army veteran, he often says that he has seen it all. One of the things that he really appreciates is his customers that are prepared for his arrival. When he backs up at the shirt printer’s loading dock, he always has a smile on his face. “These guys get it” as he would say. Their pick-up is always ready, with a dozen or more wheeled gaylords of packages lined up and ready to go. AJ has seen the explosion in their business over the last two years and appreciates that sometimes these guys are printing twenty-four hours a day. Last year during the holiday season he would make two sometimes three trips. AJ loves to see businesses booming, as that is what makes the economy run. Keep it up!

Bob started the t-shirt business twenty-three years ago from his basement. With plenty of hard work, sweat, and tears he grew the business into a very successful, multi-million dollar enterprise. More of a business person than an artist, one of the secrets to Bob’s success has been always keeping his head up for an opportunity. Five or six years ago, Bob started dabbling in the direct to garment printing movement. It was a struggle. That is until one day, all of the dots connected for him. Now, he has hundreds of online stores pushing out thousands of designs. Bob has invested in technology not just for the printing, but for more automation on the information side of the business too. He’s hired right and treats his employees like family. On the customer side of things, Bob sometimes calls them. He always appreciates a sale and says “Thank You” sincerely to each and every one that he chats with. Bob will tell you that actually talking to customers has given him some insight on how to improve his business.

“The well-satisfied customer will bring the repeat sale that counts.” – James Cash Penny

“Your customers are judging every aspect of every transaction and rating everything, from the friendliness of people to ease of doing business to the quality of the product to service after the sale.” – Jeffrey Gitomer

“Plan the sale when you plan the ad.” – Leo Burnett