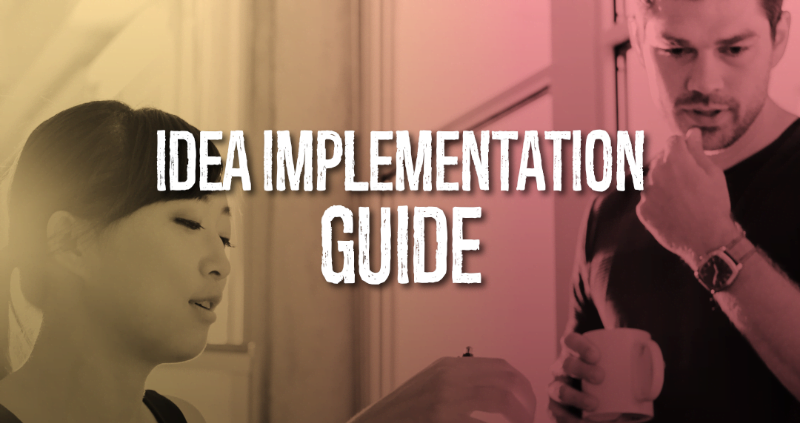 Someone once said, “Hey, I have a great idea!”

Then, almost miraculously, nothing happened. It went nowhere. Zero money was made. Nothing was improved. Lives were not changed.

Because the hard part usually isn’t coming up with the idea. The hard part is actually making it happen. Implementation is the key to anything.

This article is about making your dreams come true.

The first step in making anything work is outlining what needs to happen. You absolutely don’t have to have all the answers. But you do need to be asking the right questions. Answers can be discovered.

You need to be able to work and start acting on your idea today. Taking action is the most critical step in getting ideas past the doodle stage.

As we say in Shirt Lab, “Actions Reveal Priorities.“

Someone has to absolutely own the results.

Think back to your previous failures trying to get an idea going. One good reason why they didn’t work is that nobody owned that result.

Sure, you can have a team or a committee. That’s awesome. But, you need someone in charge that is dedicated to making the result happen. Half-assed leadership won’t work either. You can’t be named the leader and not lead.

What would you do if the results were tied to your job being terminated or your left foot being amputated if the results didn’t happen? Would you take charge or motivate your team differently?

There is a reason why Hernán Cortés burned his ships in 1519 during the Spanish conquest of Mexico. There is no turning back.

Are you willing to burn your boats to get your idea implemented?

Who is on your team? Whether these are actually your staff members or an outsourced team, you need to assess if they are capable of delivering what you need.

Will the people that you have on your team be able to do the work necessary to achieve your implementation goal? Be honest.

If they lack the time, skill, equipment, or training, what are you prepared to do to solve that?

What you want more than anything is forward progress. If somewhere during your work you feel that your progress has stalled, maybe it is time to bring in some fresh help.

A new perspective or skill set sometimes can do wonders.

One reason why some ideas never make it to the light of day is that the team responsible for working on the project simply doesn’t believe in it.

Inspired, properly motivated folks can do wonders. But at the end of the day, they have to want to be successful with the idea.

Take a minute and assess the situation. On a scale of one to ten, how fired up is your crew at solving the problem?

Don’t let a lukewarm team push out lukewarm results if your idea is important. Do something about it.

Just for the sake of argument, do you know what success looks like if your idea is implemented? What does winning look like?

Can you describe it? Taste it? Visualize it?

What impact is it going to have on others? Then, consider these points:

If you can outline the road to success with your idea, and get a motivated team to take action to see it through, your idea will happen.

It is never too late to get started. Get going!

“Celebrate the idea that you don’t fit in. Find your own fit. Stay unique.” – Betsey Johnson

“In science, credit goes to the man who convinces the world, not to whom the idea first occurs.” – Francis Darwin

“Everyone who has ever taken a shower has an idea. It’s the person who gets out of the shower, dries off, and does something about it who makes a difference.” – Nolan Bushnell

You Don’t Know Everything
Scroll to top